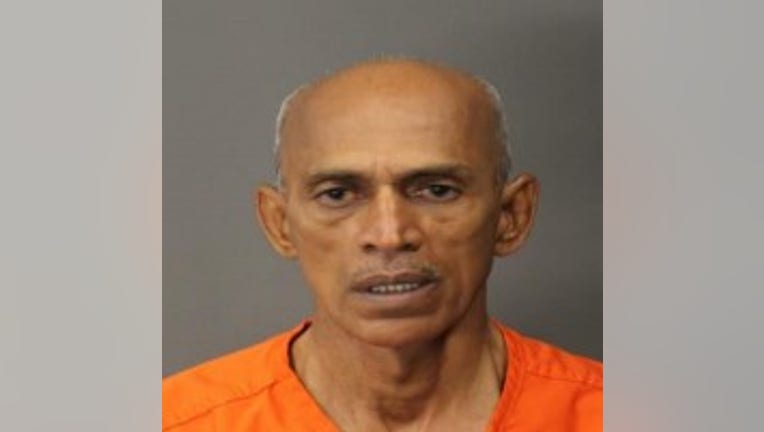 BAYTOWN, Texas - The estranged husband of a woman who was stabbed multiple times in Baytown has been charged with capital murder.

Mohamed Hismath, 55, is accused in the death of 62-year-old Sabara Umma.

Around 11:30 a.m. Sunday, police responded to an apartment complex in the 3100 block of Decker Drive and found a woman lying in front of an apartment with blood near her neck.

According to Baytown PD, authorities learned during the investigation that Umma had been kidnapped by Hismath while she stood outside of her home.

Police say Umma was talking to a relative on the phone when her estranged husband grabbed her from behind, forced her into his vehicle and drove to his apartment complex on Decker Drive.

As Hismath removed her from his vehicle, there was a struggle, police say.

During the struggle, Hismath allegedly stabbed Umma multiple times in her upper torso and neck area before fleeing the scene.

Police say someone later called Baytown communications and reported that a man approached the caller near a church and said his wife was dead. Authorities say the caller persuaded Hismath to stay to talk until patrol units arrived on the scene.

Hismath was arrested. Police say he had blood on his hands and stains on his shirt. He allegedly confessed to the murder of Umma during an interview with detectives.

Anyone who has information on this or any other crime is asked to call the Baytown Police Department at 281-422-8371. You can also contact Crime Stoppers at 281-427-TIPS, submit anonymous tips online at the Baytown Police Department website http://www.baytown.org, or text keyword BAYTOWN plus your tip to 274637 (CRIMES). Crime Stoppers will pay up to $5,000 cash and you will remain anonymous.