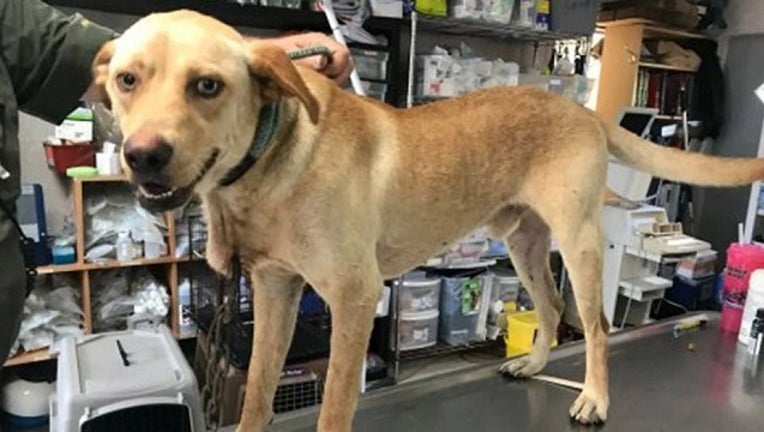 Woodrow, found with a metal carabiner through his neck, has healed from his injuries, but the search of a culprit continues. (Walton County Sheriff's Office)

(FOX NEWS) -- The Humane Society of the United States is offering a reward for information leading to the arrest of the person responsible for jabbing a carabiner -- a device typically used for rock climbing -- through the neck of a Labrador retriever.

The Humane Society announced Friday that it’s offering $5,000, while a local animal refuge center and others are also offering a reward. The combined sums mean there's a total reward of close to $10,000 -- $9,750, to be exact -- the Humane Society said.

The dog, which has been named Woodrow, was found in July; a man spotted him under his trailer.

When animal control officials arrived, “they noticed that a metal oval object with a chain hanging from it was embedded in the dog’s skin,” the statement reads.

The pup has since recovered from his injuries and “will be placed for adoption in a new loving home” after being released from the Alaqua Animal Refuge, the Humane Society said.

“These injuries did not happen by accident,” Walton County Sheriff Michael Adkinson said in a statement.

Anyone with information can call the Walton County Sheriff’s Office at 850-892-8186 or place an anonymous call to the Emerald Coast Crime Stoppers at 850-863-TIPS.

To donate to the Alaqua Animal Refuge, see here.

To donate to the Humane Society of the United States, see here.