SARALAND, Ala. - Patients of an Alabama doctor have until October 1 to become vaccinated against COVID-19, according to multiple reports.

Dr. Jason Valentine posted a photo on Facebook that showed him standing next to a sign saying unvaccinated patients would be turned away beginning October 1, according to Al.com and The Charlotte Observer.

"Effective October 1st, 2021, Dr. Valentine will no longer see patients that are not vaccinated against COVID-19," the sign read.

RELATED: History of vaccine mandates in the United States

The post is no longer visible and may have been taken down. FOX Television Stations contacted the doctor’s office for comment, but they hung up on us once we identified ourselves.

Valentine claimed three unvaccinated patients asked him where they could get the vaccine after he introduced his new policy. "No conspiracy theories, no excuses. Just where do they go," he wrote, according to reports.

Valentine said he will be accepting proof of vaccination from anyone who wishes to remain under his care. For those who don’t, he said his office "will be happy to transfer your records."

"If they asked why, I told them COVID is a miserable way to die and I can’t watch them die like that," he wrote. 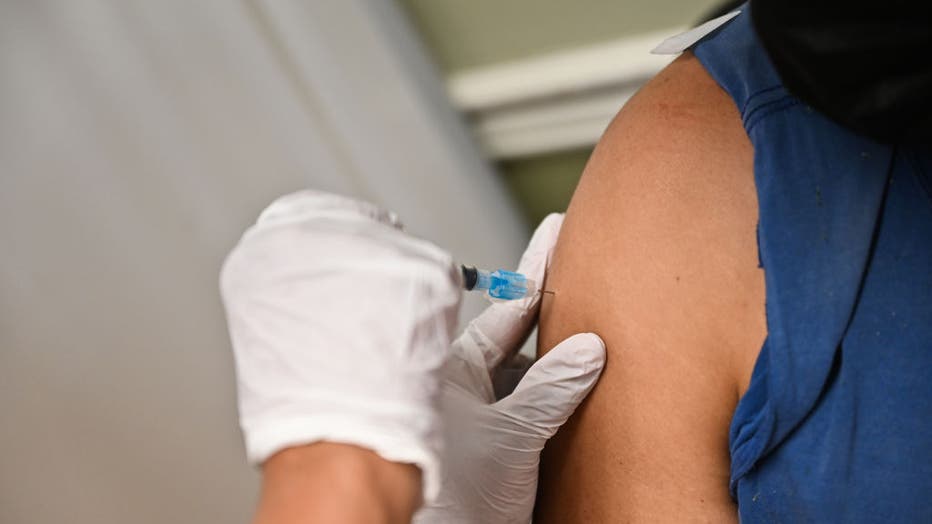 A man receives the Moderna COVID-19 vaccine while at the Long Island federally qualified health center, in Westbury, New York, on April 29, 2021. (Photo by Steve Pfost/Newsday via Getty Images)

Critics of the move have sought vengeance through online reviews.

"A doctor should never try to bully his patients into a vaccine. Hope patients find better healthcare. Plenty of doctors to choose from in Mobile," one person said in their one-star review.

Even so, those applauding Valentine’s policy flocked to his review page to boost his score.

"Kudos to you, Dr. Valentine, for caring about your patients and staff," another user said in a five-star review. "I hope your colleagues follow your example."

Like many southern states, Alabama has one of the poorest vaccination rates in the United States. As of Friday, only 35% of the state’s population has been fully vaccinated. Only 46% had received at least one dose.

Cases are surging in the Yellowhammer State, pushing the hospitals to the brink of capacity. The Alabama Hospital Association said there were no ICU beds available anywhere in the state, WBRC reported.

Many businesses and schools across the country have sought to combat the fourth wave of COVID-19 by introducing vaccine mandates.

Companies like Microsoft, United AirlinesTwitter and Google have required certain employees to show proof of vaccination. Some, like Live Nation Entertainment, will be requiring patrons to prove their vaccination status.

All 1,300 students will be initially charged the $500 fee, regardless of their vaccination status. But only the vaccinated students will receive a refund.