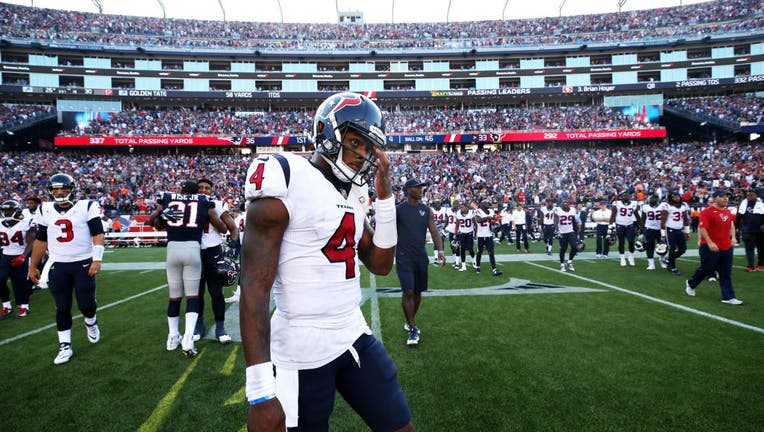 FOXBORO, MA - SEPTEMBER 24: Deshaun Watson #4 of the Houston Texans reacts after the Texans lost to the Patriots 36-33 at Gillette Stadium on September 24, 2017 in Foxboro, Massachusetts.

HOUSTON - Houston Texans quarterback Deshaun Watson has been accused of sexual assault by a female masseuse, according to lawyer Tony Buzbee.

Houston Texans Quarterback Deshaun Watson is facing allegations of sexual assault in a lawsuit filed on behalf of a female masseuse.

Watson promptly responded to the allegations, denying any misconduct. He said he wanted to clear his name, while the suit was about money.

The eight-page lawsuit was filed on Tuesday in Harris County.

The suit claims Watson assaulted the licensed massage therapist, identified as Jane Doe, during a session at her home on March 30, 2020, by touching her with his penis.

The filing claims Watson reached out to her to make an appointment via Instagram.

"He told Plaintiff that he wanted a massage for relaxation and that he was not seeking the typical sports massage," the lawsuit states. Then via text, Watson asked Plaintiff if she was "comfortable with certain areas [his] organization is making [him] get worked on."

The suit goes on to say that Watson asked Plaintiff if she was going to be home alone when he arrived for his appointment, "which gave Plaintiff some pause."

On the day of the appointment, Watson told Plaintiff to only use her hands and "repeatedly stated that he wanted her focus to be on his groin area," the lawsuit reads.

After about 25 minutes into the message, Plaintiff began to feel "extremely uncomfortable." The suit says "it became apparent that Watson wanted a massage for only one reason -- sex."

The filing describes Watson attempting to direct Plaintiff toward his penis. At one point, exposing himself and "purposely touched Plaintiff's hand with the tip of his erect penis."

Plaintiff then ended the massage and asked Watson to leave her house.

The suit says Watson told her, "I know you have a career and a reputation, and I know you would hate for someone to mess with yours, just like I don't want anyone messing with mine."

Later, Watson allegedly texted Plaintiff to apologize for the incident, to which she did not reply.