The White House announced it will be deploying "surge response teams" amid rising concerns over the delta variant.

WASHINGTON - Amid rising concerns over the delta variant of the novel coronavirus, the White House plans to deploy "surge response" teams to help combat potential outbreaks as well as work to get more shots in arms in areas where vaccination rates are low, White House coronavirus coordinator Jeff Zients said during a Thursday COVID-19 press briefing.

"As both Dr. Walensky and Dr. Fauci just made clear, the delta variant is a threat to unvaccinated Americans and to communities with low vaccination rates. And the best way for communities to protect themselves from the virus is by getting more people vaccinated," Zients said.

Despite relaxed preventative health restrictions and decreasing COVID-19 deaths, the United States is still vulnerable to flare-ups and rebounds, according to Dr. Hilary Babcock of Washington University at St. Louis.

The variants "are able to find any gaps in our protection," she said, pointing to how hospital beds and intensive care units in Missouri’s least-vaccinated southwestern counties suddenly are filling — mostly with adults under 40 who never got the shot. 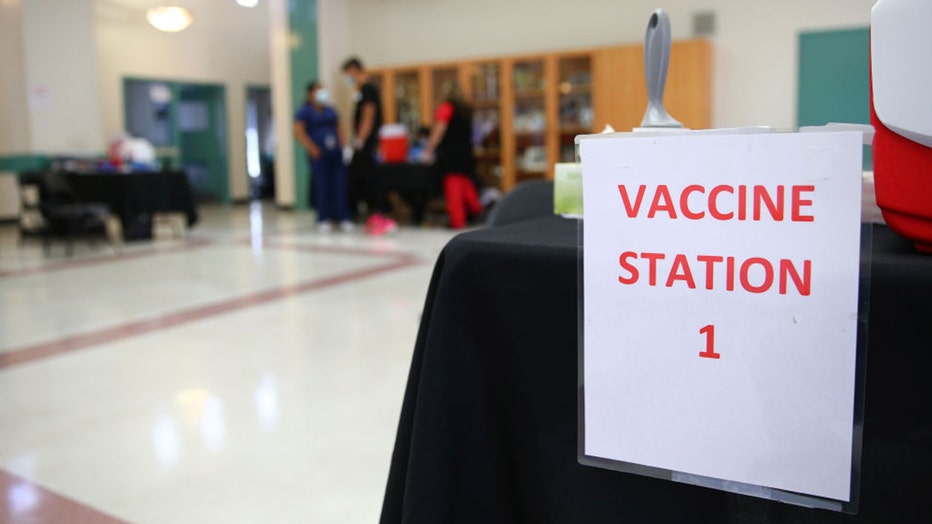 FILE - A 'Vaccine Station 1' sign is posted at a vaccination clinic at Roosevelt Park in South Los Angeles on June 25, 2021 in Los Angeles, California.

With nearly half the U.S. population immunized, Dr. Rochelle Walensky, director of the U.S. Centers for Disease Control and Prevention, said about 1,000 counties, mostly in the Midwest and Southeast, have vaccination rates below 30% and "are our most vulnerable."

Meanwhile, British researchers found two doses of the Pfizer-BioNTech vaccine were only slightly less effective at blocking symptomatic illness from the delta variant than from earlier mutations — and importantly, remain hugely protective at preventing hospitalization.

But just one dose proved far less effective against the delta variant than against earlier versions of the virus.

Experts also noted the Moderna vaccine, the same type as Pfizer’s, should provide ample protection against the delta variant. Moderna said this week that an analysis of blood samples from people who had received the company’s vaccine showed a strong level of antibodies indicative of robust protection against known variants.

To assist with fighting back yet another potential surge, the White House will stand ready to deploy federal personnel and provide resources as needed. The surge response teams will provide further vaccinations, testing, as well as therapeutics to help treat anyone infected with the novel coronavirus.

"Today, given what we are seeing with the spread of delta in some communities in the country, we’re intensifying our efforts to help states prevent, detect and respond to the hot spots among the unvaccinated by mobilizing COVID-19 surge response teams to be at the ready to deploy federal resources and where needed, federal personnel. These are dedicated teams working with communities at higher risk or are already experiencing outbreaks due to the spread of the delta variant and their low vaccination rates," Zients continued.

Scientists believe the delta variant is about 50% more transmissible than other types and there are early clues that some mutations may ease a key step in how the virus slips inside human cells, said Priyamvada Acharya, a structural biologist at the Duke Human Vaccine Institute.

Still, it’s not clear if higher contagion is the whole reason the variant is spreading so quickly. In Britain, its rise followed a loosening of restrictions in May, when restaurants, gyms and other businesses reopened, and thousands of fans have attended sports events.

As more research is being conducted on the delta variant, scientists are also attempting to figure out if it is just as or more deadly than any other mutations that have become a prominent concern.

British experts have said there are some preliminary signs it may increase hospitalization, but there’s no evidence it is more lethal.

In the wake of rising delta variant cases around the world, the CDC has said those who are fully vaccinated, which is two weeks after your final shot, can resume activities that they did prior to the pandemic without wearing a mask or physically distancing unless it’s required in your area by state or local law.

"Bottom line and finally, the good news we have is that we have a solution. The science is clear. The best way to protect yourself against the virus and its variants is to be fully vaccinated. It works, it’s free, it’s safe, it’s easy and it’s convenient," Fauci said.

The Associated Press and Megan Ziegler contributed to this report.