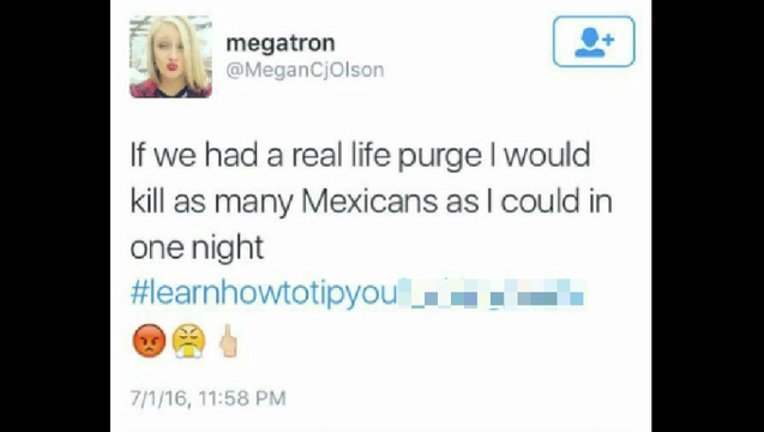 (FOX 11) - A Colorado waitress, apparently upset that a customer didn't tip well, was fired after taking to social media to express her frustration in an alleged racist tweet.

FOX 47 News reports that Megan Olson was fired from Texas Roadhouse after allegedly posting the following message on Twitter:

"If we had a real life purge I would kill as many Mexicans as I could in one night."

Several people posted screenshots of the tweet on Texas Roadhouse - Greeley Facebook page, demanding for her to be fired.

"Our managing partner was actually mowing his lawn when he was alerted,” company spokesman Travis Doster told FOX 47. "He immediately rushed to the restaurant, met with the employee who posted this disgusting tweet and she was terminated."

Olson didn't return a request for comment, but reportedly posted an apology on Facebook, according to the station.

"I wrote hurtful, inconsiderate, insensitive and careless words and I understand the amount of people I have offended by that. There are no excuses for what I have done. I sincerely, from the bottom of my heart, apologize to everyone for my momentary lack of judgment. I want you all to know that I do not actually feel this way."