At the moment, our counties are out of the cone. The impacts for SE Texas remain possible elevated tides, high surf and coastal flooding. Showers will be possible on Friday from wrap-around moisture from Delta. We will keep watching closely.

HOUSTON - Hurricane Delta intensified to a Category 4 hurricane Tuesday morning on a course to hammer southeastern Mexico and then strike the U.S. Gulf Coast later in the week.

As of 10 p.m. Tuesday, Delta was located about 135 miles east-southeast of Cozumel, Mexico. The hurricane has maximum sustained winds of 130 mph.

Hurricane Delta is forecast to bring 4 to 8 inches of rain to the central Gulf Coast this weekend with higher amounts of up to 12 inches possible per the National Hurricane Center.

The current forecast track then shows Delta making landfall along the U.S. Gulf Coast later this week. Houston is not in the cone of uncertainty, which stretches from Louisiana to the Florida Panhandle.

Although the Houston area will most likely avoid a direct impact, the impacts for southeast Texas remain possible. Elevated tides, high surf and coastal flooding. Showers will be possible on Friday from wrap-around moisture from Delta. 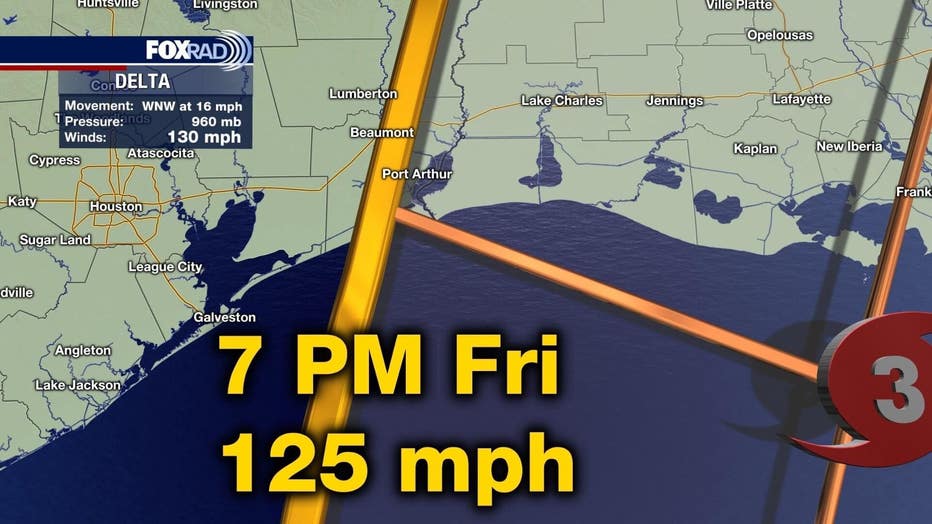 A slower northwestward to north-northwestward motion is forecast to begin on Thursday, and a northward motion is expected Thursday night and Friday. On the forecast track, the center of Delta will move over the northeastern portion of the Yucatan Peninsula early Wednesday.

This clip shows choppy waves and windy conditions in Chabihau, a coastal village on the Yucatan Peninsula. (Credit: rolas_mx via Storyful)

The worst of the immediate impact was expected along the resort-studded northeastern tip of Mexico’s Yucatan Peninsula, where hurricane conditions were expected Tuesday night and landfall early Wednesday.

From Tulum to Cancun, tourism-dependent communities still soaked by the remnants of Tropical Storm Gamma could bear the brunt of the storm.

In Cancun Tuesday, long lines stretched at supermarkets, lumber yards and gas stations as residents scrambled for provisions under mostly sunny skies. Officials warned that residents should have several days of water and food on hand. Boat owners lined up at public ramps to pull their boats out of the water.

This footage shared from Cozumel shows long lines at gas stations ahead of Hurricane Delta. (Credit: Israel Herrera via Storyful)

Some hotels that had exemptions because their structures were rated for major hurricanes were preparing to shelter their guests in place and testing their emergency systems.

The FOX 26 Weather Team is closely monitoring developments. They will continue to keep you up-to-date online, on-air, and on social media. You can also stay up-to-date 24 hours a day by downloading the free FOX 26 weather app. You'll receive weather alerts for your location, along with video weather updates.