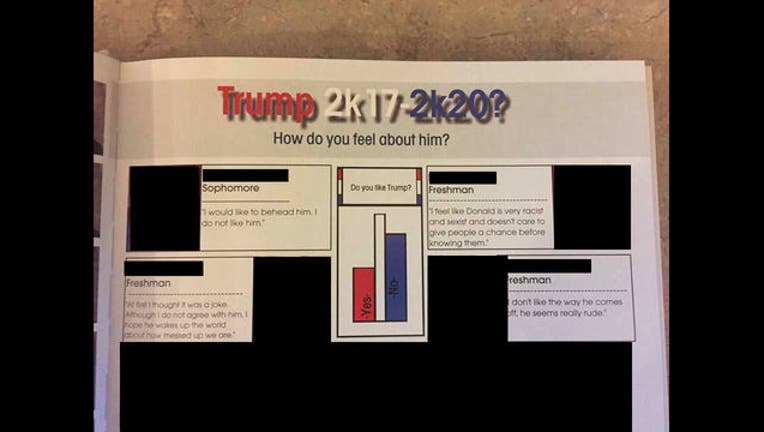 BRAINERD, Minn. (KMSP) - Administrators at Brainerd High School are investigating a quote that was published in the yearbook, attributed to a sophomore student who said she “would like to behead” President Donald Trump. The quote was published on a page titled, “Trump 2k17-2k20? How do you feel about him?”

The student reached out to Fox 9, saying the quote was taken out of context. She says when she was asked the question she didn't know it was for the yearbook and she told her peer she didn't like Trump and then made a beheading joke. She found out about the controversy on Friday when she saw a picture of the yearbook page shared on Facebook.

"I didn't know it had a chance to be in the yearbook," she said. "They took what I said and condensed it. I don't think [the yearbook member] meant any harm and I don't blame anyone."

She says she has received a lot of backlash on social media, mostly from adults and she is afraid of possible retaliation.

Brainerd Public Schools issued the a statement Friday that said the administration was “previously unaware of the students’ statements in the yearbook.”