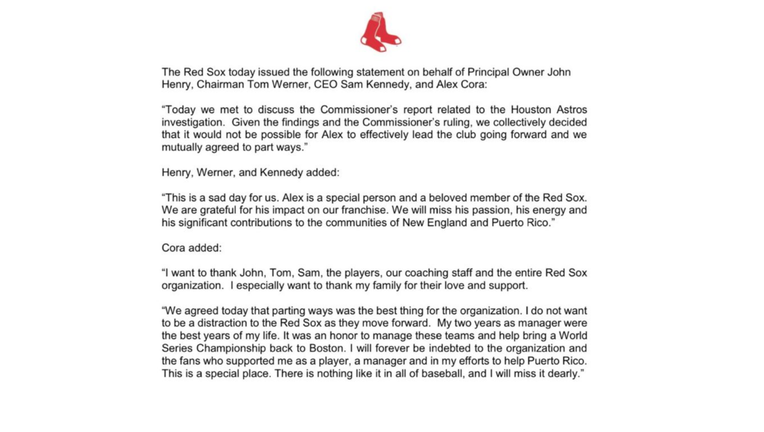 A day after Astros General Manager Jeff Luhnow and manager A.J. Hinch were fired, the Boston Red Sox announced that they have decided to part ways with manager Alex Cora.

"Today we met to discuss the Commissioner's report related to the Houston Astros investigation. Given the findings and the Commissioner's ruling, we collectively decided that it would not be possible for Alex to effectively lead the club going forward and we mutually agreed to part ways," a Tuesday evening statement read.

Early in the 2017 season in question, Alex Cora, the Astros’ Bench Coach at the time, began to call the replay review room on the replay phone to obtain the sign information. On at least some occasions, the employees in the replay review room communicated the sign sequence information by text message, which was received on the smart watch of a staff member on the bench, or in other cases on a cell phone stored nearby.

"I want to thank John, Tom, Sam, the players, our coaching staff and the entire Red Sox organization. I especially want to thank my family for their love and support," Cora said in the statement.