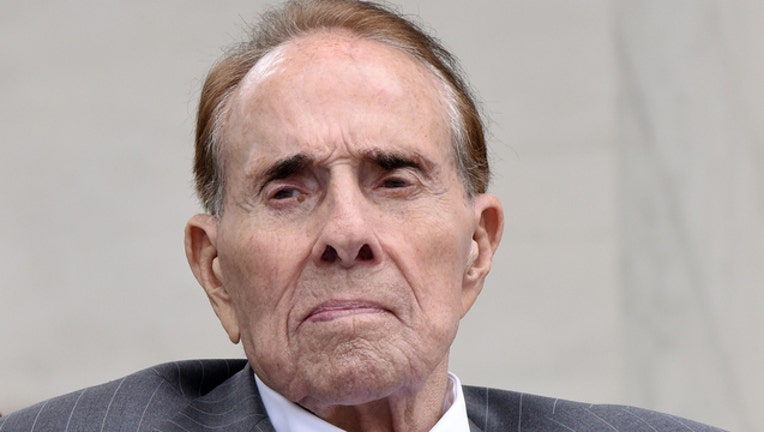 Former Sen. Bob Dole (R-TN) attends a wreath-laying ceremony at the Tomb of the Unknown Soldier at Arlington National Cemetery on Memorial Day, May 29, 2017 in Arlington, Virginia. (Photo by Olivier Douliery - Pool/Getty Images)

The two shared a stage under the Capitol dome Wednesday as Dole, 94, accepted Congress' highest civilian honor, the Congressional Gold Medal, for his World War II service and decades of work in the House and Senate. Trump, meanwhile, was mired in a pitched budget battle that threatened to end in a government shutdown at week's end.

The president nonetheless saluted Dole as "a patriot" and gave tribute to Dole's struggle as a veteran who worked his way back from a grievous shoulder wound he suffered in Italy.

But it was Dole's penchant for working across the aisle that earned him his latest award, according to the legislation.

"Bob Dole was known for his ability to work across the aisle and embrace practical bipartisanship," reads the legislation Trump signed in September. Some of the award's 300 recipients include George Washington and Mother Teresa, according to the Congressional Research Service.

Much of his best thinking, Dole said, was done while gazing from his West-facing offices in the Capitol the length of the Mall, past the Washington Memorial and across the Potomac River to Arlington, Virginia.

"Leadership," he said in remarks read by wife Elizabeth, "begins with the long view."

Bipartisanship is a concept not often embraced these days, especially by the unconventional president Dole endorsed during the 2016 election. Trump's profanity-laced meeting with lawmakers of both parties on immigration last week blew up whatever comity may have existed between him and Congress at the start of 2018. Trump denigrated Haiti and countries in Africa as "shitholes," according to multiple people present. Dole, even at his crankiest, has never been known for such a tone or attitude.

"If there's anyone who has mistakenly attached themselves to our party in the belief that we are not open to citizens of every race and religion, then let me remind you," Dole said during his acceptance speech at the 1996 Republican National Convention. "Tonight, this hall belongs to the party of Lincoln. And the exits, which are clearly marked, are for you to walk out of as I stand this ground without compromise."

For all of that, Trump reached the pinnacle of American politics. Dole reached for the White House multiple times — as Gerald Ford's running mate in 1976, in Republican presidential primaries of 1980 and 1988, and finally as the GOP's nominee in 1996. He lost in an Electoral College landslide to Democrat Bill Clinton.

Dole, born in Russell, Kansas, grew up during the Great Depression and was a pre-med student at the University of Kansas when he enlisted in the Army. He was grievously injured during an offensive in Italy as he tried to save another soldier. Despite multiple surgeries, Dole was left with a virtually unusable right arm and clenched hand, in which he often put a pen. He was awarded two Purple Hearts and a Bronze Star, among others.

"He knows grit," Trump said in his own remarks, in which he called Dole a patriot.

"He was a hell of a leader," said former Sen. John Warner of Virginia, exiting a Senate elevator on his way to the Rotunda Wednesday. "For all of the meaning of the medal he's getting today, the Purple Heart is the one he really cherishes."

Dole was a lifelong advocate for disabled Americans, highlighted by the key role he played in advancing the Americans With Disabilities Act in 1990.

"Son of the soil, citizen, soldier and legislator, Bob Dole understands the American people, their struggles, their triumphs and their dreams," said Clinton at the time.

Bob Dole, who sometimes called himself, "Bob Dole," displayed some trademark wit in thanking the other speakers for the "kind words."

"They're probably not true, but they're kind."