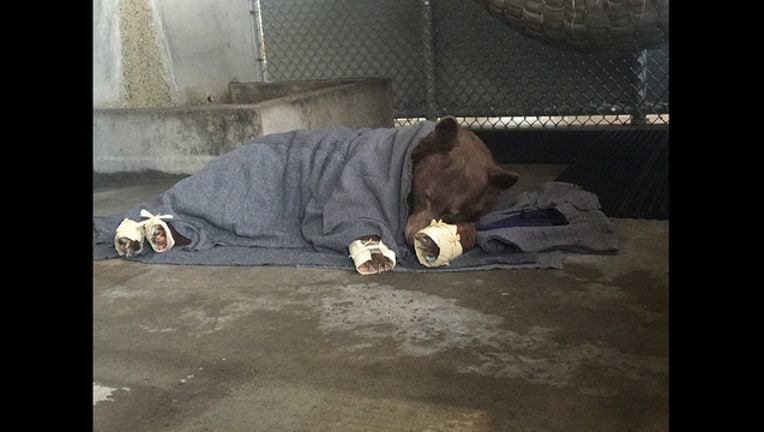 SAN FRANCISCO (AP) -- Veterinarians successfully used alternative medical treatments such as acupuncture on three wild animals burned in the Southern California wildfires, although one patient -- a 5-month-old mountain lion -- did keep eating his fish-skin and corn-husk bandages, vets at the University of California, Davis said Wednesday.

Rescuers brought two adult bears, one of them pregnant, and the young mountain lion to veterinarians with the state Department of Fish and Wildlife and the university after the animals were hurt in the largest wildfire in state history. They were found in the Los Padres National Forest, whose mountains stretch through badly burned areas of Santa Barbara and Ventura counties.%INLINE%

The bears had suffered third-degree burns on all their paws, said Jamie Peyton, chief of the Integrative Medicine Service at the university's vet school. The cub also burned all four paws. %INLINE%

Standard pain treatment is a problem for both the animals and their caregivers when it comes to wildlife with sharp teeth and claws, Peyton said. For safety, vets have to heavily sedate the animals every time they change their bandages or otherwise care for them.

"You can only anesthetize them so many times," Peyton said. "It's hard on them. We can't do that to them every day."%INLINE% %INLINE%

Putting pain pills in food also is problematic, because there's no guarantee the animals will eat them, Peyton said.

Instead, Peyton and her colleagues used some of the alternative methods she already employs with other animals, including acupuncture, chiropractic treatment, and cold-laser therapy. Many health-insurance companies consider some of the treatments experimental or unproven, and do not always cover their costs in human patients.

Vets carried out the alternative treatments only on days when the bears and mountain lion were already anesthetized for bandage changes or other standard care.

"I adore them, but they're wild," Peyton explained.

Another form of treatment seemed most helpful of all for the bears, vets said.

The California vets stitched the fish skins to the animals' burned paws, then wrapped the treated feet with bandages of rice paper and corn husks, after reading about trials on human burn victims in Brazil that placed treated skins from tilapia, a ubiquitous species of fish, on burn victims to soothe pain and promote healing.%INLINE%

Doctors routinely graft skin from humans and pigs to burns, but fish skins have the advantage of being more readily available.

"We made little spring rolls with their feet," Peyton said.

Ordinary cloth bandages can block animals' intestines if the animals eat them, which they often do.

One of the bears initially laid down continuously to spare her burned paws, not wanting to stand or walk at all, Peyton said. %INLINE%

"After the first time we put the bandages on, she woke up, she stood up," and showed interest in her surroundings, she said. Both bears were soon walking.

The results argue for more trials of the fish skins for burns, the vets said.

After weeks of treatment, wildlife officials released the bears back into the burned Los Padres National Forest last week. They plan to release the cub this week.%INLINE%