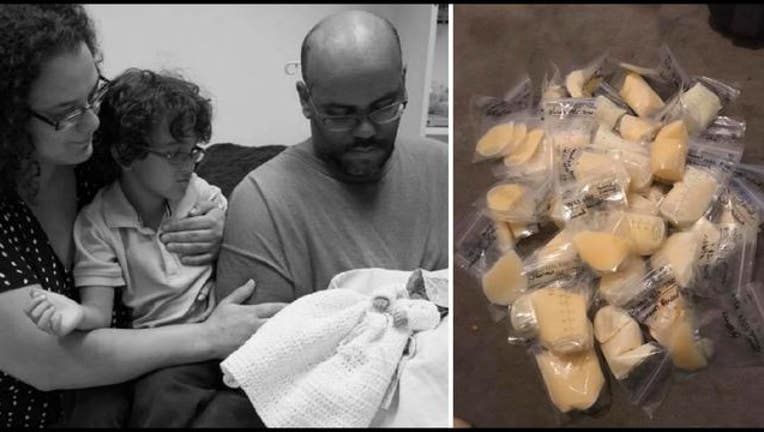 VALLEJO, Calif. (KTVU) - Jamiere Gervais, 35, of Vallejo is moving forward after the devastating loss of her daughter in the best way she knows how.

As she grieves, Gervais decided to donate her breast milk to NICU babies in memory of her daughter. "I decided through the tragedy I wanted to donate the milk to honor her life and give purpose to her life - it's helping me grieve through it."

Gervais and her fiancé Jerry's baby girl was due at the end of March. The couple, who has a 5-year-old son, had been trying to get pregnant for three years and were thrilled to learn they were expecting a girl.

She was heartbroken to learn at 20 weeks pregnant that her baby had Ancephaly which is a serious birth defect. It meant her daughter was missing parts of her brain and skull and would not survive.

In addition to donating her milk, Gervais also wants to raise awareness about Ancephaly. Although it's unclear what causes Ancephaly, it could be related to genes and chromosomes. "Getting enough folic acid before and during early pregnancy can help prevent neural tube defects, such as anencephaly," according to the CDC.

Gervais says she ate pretty healthy and began taking prenatal vitamins as soon as she found out she was pregnant. She says she'll never know the exact cause of her baby girl's birth defect.

As Gervais mourns her loss she wants to do what she can to help babies in need. "With my son it was tough to produce breast milk so I know I can help other mothers."

She has been pumping in 30 minute to one hour sessions about three times a day. "I'm so proud to be doing this, I think my daughter is smiling down on us from heaven," she said.

Gervais' milk is being donated to Mother's Milk Bank.

A You Caring page was set up for the Gervais family to help with medical bills.