According to Houston Police Department Assistant Chief of Police Wendy Baimbridge, a Cadillac Escalade was stolen on Monday morning in the 9800 block of Black Hawk in Houston.

Around 3 p.m., Baimbridge said OnStar notified the Pasadena Police Department about the vehicle as it was in their jurisdiction. 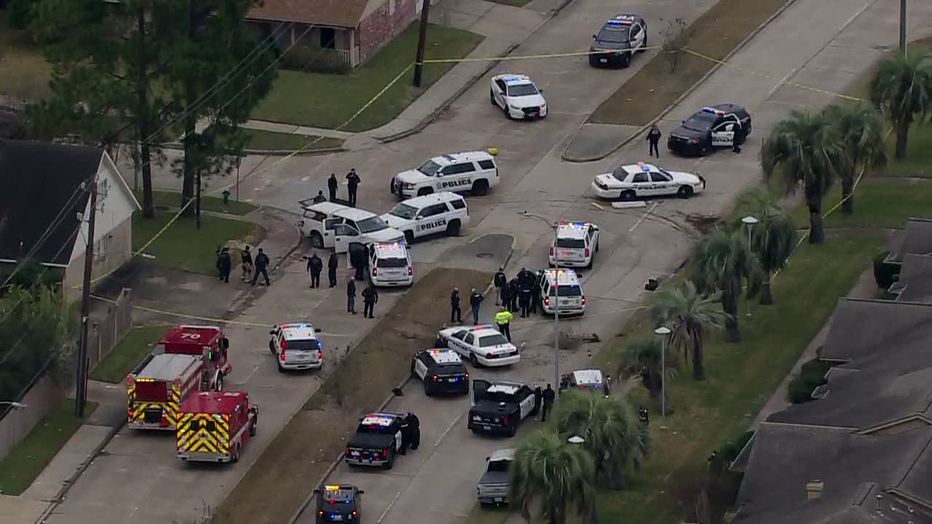 Photo from the scene from SkyFOX in the 11100 block of Sabo Road.

That's when OnStar shut off the vehicle at College and Arizona and officers with Pasadena police approached the suspect, according to Josh Bruegger, Chief of Police with the Pasadena Police Department.

Authorities said that's when the suspect put a gun to his head as if he was going to commit suicide. Authorities then backed off and the suspect, with the gun still to his head, jumped into a truck, which was unoccupied and had the keys in it, and stole the truck.

Baimbridge stated that the suspect fled the scene and ignored Pasadena police to stop and pull over. The suspect hit several vehicles on the Gulf Freeway. It's unclear how many vehicles were hit. The suspect then proceeded to drive southbound in the northbound lanes of the freeway, exited at Fuqua, lost control of the vehicle, and police surrounded the suspect.

Authorities said the suspect then brandished a weapon and that's when the shooting occurred. No officers were injured in the incident.

According to Bruegger, a total of four officers were involved and fired with multiple rounds being fired. The suspect was pronounced dead at the scene.

Bruegger stated the suspect was alone throughout the whole incident.

The four officers will be placed on administrative leave for at least the next five days.

Houston police will be investigating the shooting, along with the District Attorney's Office, while Pasadena police conduct the administrative part of the investigation.