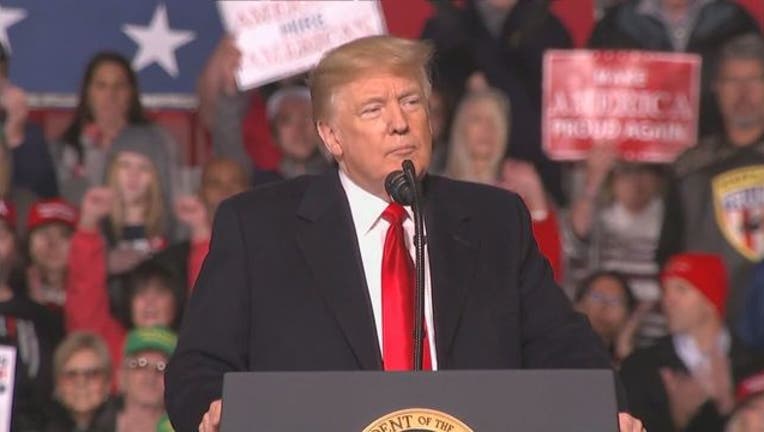 LEBANON, Ohio (AP) — President Donald Trump took a victory lap in Ohio on Friday, touting a "really historic week for America" that began with the installation of his second Supreme Court justice and concluded with the release of an American detained in Turkey.

Jocular and boastful, Trump barnstormed — in what was a barn on a rural fairgrounds — for Ohio's gubernatorial and congressional candidates, but, as he often does, spent much of the hour-plus speech touting his own track record. He zeroed in on the past week, which many White House aides believe was one of the most successful of his presidency.

Trump drew loud cheers from the crowd for securing the release of pastor Andrew Brunson, swaggering that "we bring a lot of people back." After Brunson was sentenced to three years in a Turkish prison on terror charges, Turkey's government quickly freed him to return to the U.S.

Trump dwelt at length on the trials of Brett Kavanaugh, who was seated on the Supreme Court this week after a contentious confirmation process that featured multiple accusations of sexual misconduct, which he denied, and bitter partisan battles. But Trump argued that the bruising process, which ignited a soul-searching national conversation about sexual assault, was "a tremendous service" for his party.

"We are more energized as Republicans than ever before," Trump told the crowd bundled against the chill on the outskirts of the Cincinnati region. "Did he get treated badly or unfairly or what? Horrible."

Returning to a recent incendiary talking point, Trump deemed the Democrats who opposed Kavanaugh "a mob," but said they would not stop him from potentially, he guessed, appointing up to four more justices to the court throughout his time in office — for a total of six, or two-thirds of the court's nine justices.

"Republicans believe in the rule of law, not the rule of the mob," Trump said. "These are bad people. We can't let his happen to our country."

And he invoked Thursday's bizarre Oval Office appearance by hip hop megastar Kanye West, who held court across from Trump to call for prison reform, reveal his own struggles with mental illness, tout the need for an improved Air Force One and become likely the first person to utter the phrase "crazy motherf---er" — at least in front of the press — in that storied room.

"It was pretty amazing, wasn't it?" Trump asked with a smile before highlighting low minority unemployment numbers as a reason for black voters to switch to the GOP.

"We are asking all African-American voters to honor us with their support," Trump said. "Get away from the Democrats!"

Following along the teleprompter, Trump spent a few minutes extolling a slate of Republican candidates, including Rep. Jim Renacci, who is challenging Democratic U.S. Sen. Sherrod Brown, as well as Rep. Steve Chabot, who is in a hotly contested fight with Aftab Pureval.

But most of the night resembled a greatest hits show, as Trump touted the growing economy, stressed the need for his proposed Space Force to defend the heavens, suggested the nation needed to build "bigger arenas" to hold his rally crowds and danced along the edge of offending two ethnic groups by exaggerating the threat posed by Latino MS-13 gang members by suggesting they be hauled off in "paddy wagons."

He also deemed many of his predecessors as "normal" before going on a rambling recollection of historical Ohioans, which included a salute to Ulysses S. Grant for overcoming Robert E. Lee if not his own alcoholism and suggesting that President William McKinley was a wildly underrated president.

Trump also managed to tie the controversy over NFL players kneeling for the national anthem to the moon landing, recalling Neil Armstrong's first moments on the lunar surface.