FOX 26's Mark Berman hears from Houston Astros catcher Martin Maldonado after being told by the MLB he couldn't use a bat gifted by Albert Pujols.

HOUSTON (AP) - Houston Astros catcher Martín Maldonado was forced to switch bats for Game 2 of the World Series on Saturday night after it was determined the Albert Pujols model he swung in the opener was no longer allowed in the majors.

Maldonado was 0 for 3 in a 5-2 win over the Phillies that evened the Series at one game apiece. 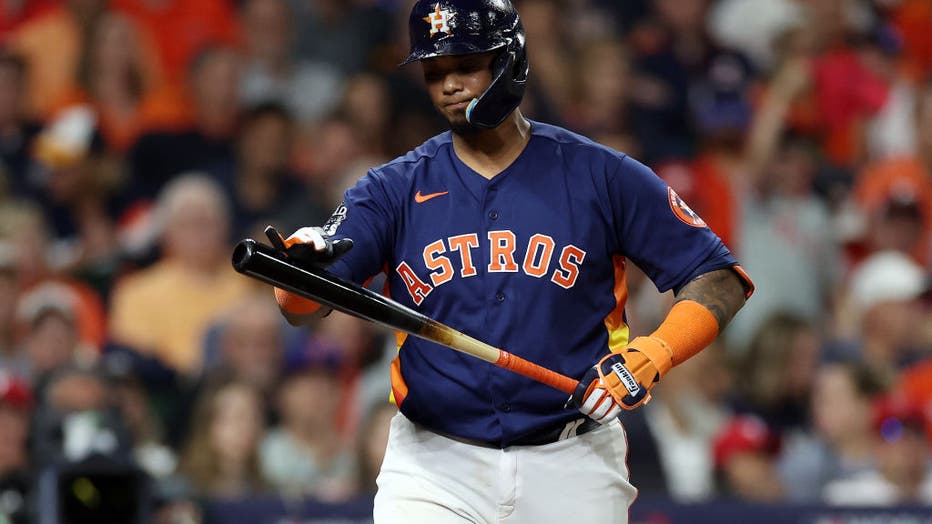 HOUSTON, TEXAS - OCTOBER 29: Martin Maldonado #15 of the Houston Astros strikes out in the second inning against the Philadelphia Phillies in Game Two of the 2022 World Series at Minute Maid Park on October 29, 2022 in Houston, Texas. (Photo by Sean

The bat he used in Game 1 — a Marucci AP5 — was a Pujols model. In 2010, Major League Baseball changed bat specifications for safety purposes, trimming the diameter of the barrel from the long-standing 2.75 inches to 2.61 inches.

FOX 26's Sherman Desselle speaks with Phillies fans in Houston for World Series Game 1 and 2 about what they've enjoyed while in the city.

The move to slightly slimmed-down bats was designed to reduce the risk of them breaking into multiple pieces. As part of the move, players already in the majors and using bigger bats could continue to swing them.

Maldonado made his big league debut in 2011 and therefore couldn’t use any of the bats that had been grandfathered in.

"I got it yesterday," he said. "I use the same model, but it is modified because of my service time. It’s a rule, and I follow the rule, so I didn’t use it."

MLB didn’t find Maldonado had any competitive advantage using the Pujols model, and it appeared the mix-up was an honest mistake. Maldonado batted .186 this season and is a career .209 hitter in 12 seasons.

Pujols finished his 22-year career this season with 703 home runs, fourth on the all-time list.

Framber Valdez speaks about his journey to the World Series

FOX 26's Coco Dominguez talks with Houston Astros pitcher Framber Valdez about his childhood growing up in the Dominican Republic.

Bat maker Jack Marucci said the AP5 was "one of the original models I worked with Albert to design."

"He was the first player to give me a bat to replicate," Marucci texted to The Associated Press.

It wasn’t the first time Maldonado had used the bat.

"I used it back when I played with him, but he was my teammate, maybe three at-bats," he said of when he and Pujols were teammates with the Angels in 2017 and part of the 2018 season.