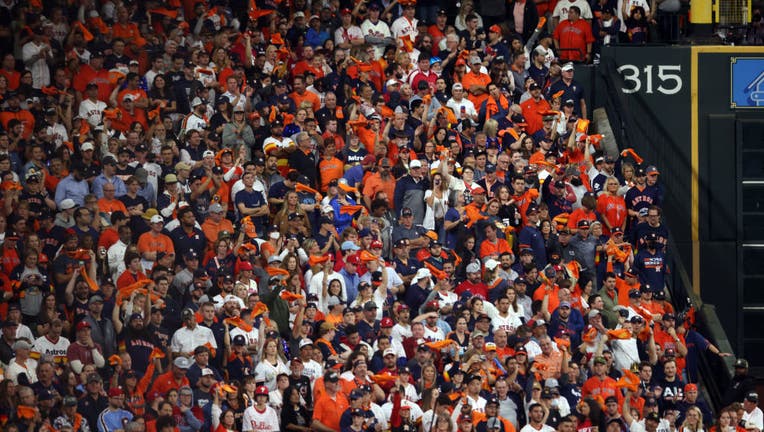 HOUSTON, TX - OCTOBER 29: Houston Astros fans cheer in the ninth inning of Game 2 of the 2022 World Series between the Philadelphia Phillies and the Houston Astros at Minute Maid Park on Saturday, October 29, 2022 in Houston, Texas. (Photo by Rob Tri

HOUSTON - With Game 2 in the books, one family is finding themselves in a pickle with a house divided.

The Boudwin family spoke with FOX 26 about how they're faring so far in this World Series.

The match-up seemed destined with Philly fans chanting "we want Houston." After Game 2, the Astros and Phillies are now tied 1-1 in the series and will play Game 3 on Monday in Philadelphia.

FOX 26's Sherman Desselle speaks with Phillies fans in Houston for World Series Game 1 and 2 about what they've enjoyed while in the city.

"About a week ago I thought it was a real possibility. It was both bittersweet watching a game where you can’t lose because you love both teams," says Boudwin. "This series is providing some difficulties though, I got my one set of boys behind me, all of my children are Houston Astros fans."

Three generations now living in the Houston area, family members are taking sides for the love of sports.

Despite Game 1 of the World Series not going exactly how we planned, Houston Astros fans remain hopeful and hyped they could turn things around. FOX 26's host of Isiah Factor Uncensored, Isiah Carey shares more from fans before and after the game!

"If you are pushing me I think it’s hard to say no to my blood and where I was born," says Boudin.

ASTROS: Houston Astros have never won the first game of the World Series

Boudwin's parents are sporting their Phillies gear for the World Series showing their dedication to the team.

Though, when it comes to which team Robert Boudwin wants to see win it all, he says "No matter who wins, I feel like I've won."