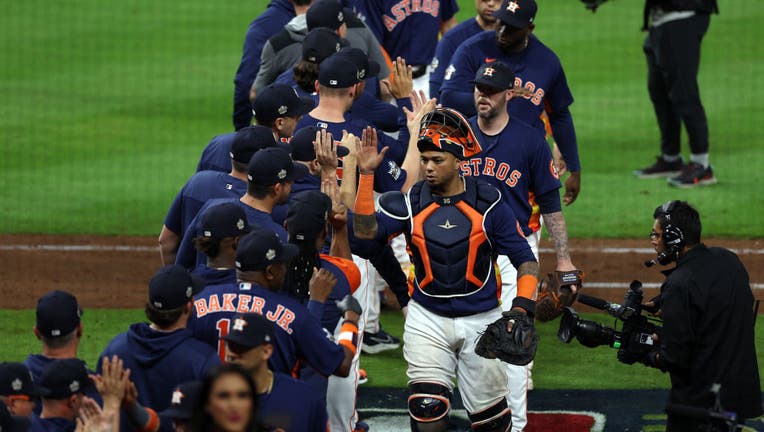 HOUSTON, TEXAS - OCTOBER 29: Members of the Houston Astros celebrate after a win over the Philadelphia Phillies in Game Two of the 2022 World Series at Minute Maid Park on October 29, 2022 in Houston, Texas. (Photo by Rob Carr/Getty Images)

HOUSTON - The Houston Astros have tied the series after defeating the Philadelphia Phillies in Game 2 of the World Series.

In the top of the first inning, Valdez saw a total of four batters, with one walk and a strikeout. No score after top of the 1st inning.

On the Astros first at-bat in the bottom of the first inning and the first swing, Jose Altuve hit a line drive double into left center field.

In the next at bat, Jeremy Pena doubled down the left field foul line, scoring Altuve. 1-0 Astros.

On the next at bat, Yordan Alvarez takes it to the left field wall and bounced off, scoring Pena and another double.  2-0 Astros.

During Yuli Guerriel's at bat, the Phillies third baseman couldn't make the throw to first base in time. That scores Alvarez. Astros lead 3-0.

After one inning of play, Astros lead 3-0 and is off to a hot start!

Phillies were unable to score in the top of the second inning. Valdez has three strikeouts. Astros lead remains 3-0.

In the bottom of the second, the Astros were unable to extend their lead. Score remains 3-0.

In the top of the third inning, Valdez continues to strike out Phillies batters with five strikeouts. Score remains 3-0.

After three innings of play, the Houston Astros remain in the lead 3-0.

In the top of the fourth inning, incredible defense by Alex Bregman and pitching by Framber Valdez keeps the Astros lead at 3-0.

The Houston Astros were unable to score in the bottom of the fourth inning. Score remains 3-0 Astros.

In the top of the fifth inning, incredible defense by the Astros turned an amazing 6-4-3 double play. Score remains 3-0 Astros.

In the bottom of the fifth inning, Alex Bregman launched one to left center field for a two-run home run! Astros extend their lead, 5-0.

The fans at Minute Maid Park erupt into celebration following the home run.

In the top of the sixth inning, the incredible defense of the Astros turned another double play against the Phillies.

In the bottom of the sixth inning, the Astros were unable to extend their lead. Score remains 5-0.

In the top of the seventh inning, Astros pitcher Framber Valdez received a standing ovation by the Astros faithful after pitching 6.1 innings.

The Phillies got their first run of the game on a SAC fly to left field in the top of the seventh. Astros lead 5-1.

In the bottom of the seventh inning, Jose Altuve was able to get his third hit of the game, but was tagged out while trying to steal third base. Astros lead remains 5-1 after seven innings.

In the top of the eighth inning, some scary moments for Astros fans after a Phillies home run was ruled a home run, but later overturned as a foul ball. Then the player smacked the ball all the way to the right field wall where Kyle Tucker made the out.

Then an error by the Astros infield moved a runner from second base to third base. However, a very important catch by Jeremy Pena retired the side. 5-1 Astros in the middle of the eighth inning.

The Houston Astros were unable to get any additional scoring in the bottom of the eighth inning. On to the ninth inning we go!

In the top of the ninth inning, an error by Yuli Gurriel along the first base line, scoring a Philadelphia Phillies player. Score now 5-2 Astros.

However, the Astros were able to close out game two and tie the series at one game a piece.

Game 3 will take place on Monday night at Citizens Bank Ballpark in Philadelphia. The game will be aired on your World Series station, FOX 26.

The Astros took the Commissioner's Trophy home in 2017, but the Phillies have the edge in championships, winning championships in 1980 and 2008.

The Astros went undefeated in this year's ALDS and ALCS in this year's playoffs sweeping both the Mariners and Yankees to advance to the World Series.

The Astros have never won a Game 1 in the 5 World Series they've been to.