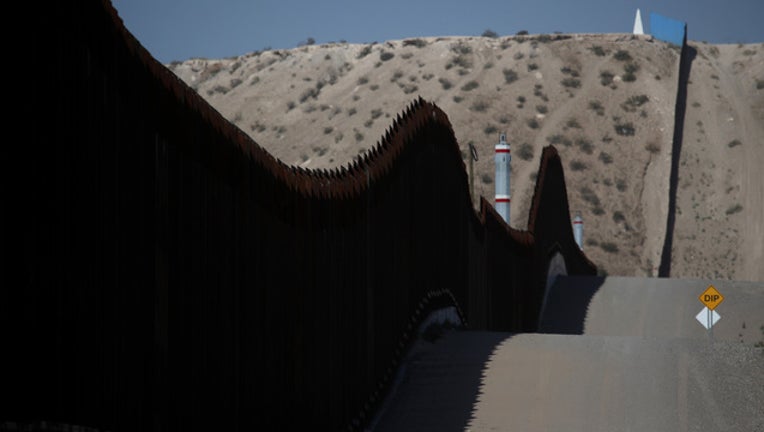 A view of fencing along the border of the United States and Mexico on March 31, 2019 in Sunland Park, New Mexico. U.S. (Photo by Justin Sullivan/Getty Images)

SUNLAND PARK, N.M. (AP) - An armed group that has been patrolling the U.S.-Mexico border left its post in the New Mexico desert Tuesday amid pressure from law enforcement following videos that showed militia members stopping migrants who had illegally crossed into the country.

Sunland Park police and security officers with a railroad company told members of the United Constitutional Patriots on Tuesday they needed to move their trailers and equipment. Union Pacific Railroad said the group crossed its land to access the site and requested that the group not trespass onto its property.

City spokesman Peter Ibaro said that police helped the railroad remove the group by 3:45 p.m. after they installed no trespassing signs. By Tuesday afternoon, all that remained at the encampment was a trailer.

The leader of the United Constitutional Patriots was arrested last weekend on 2017 weapons charges following widespread criticism spurred by videos of the group stopping migrants who illegally crossed the border.

A criminal complaint filed Monday alleged that Larry Hopkins said in 2017 that he was training supporters to assassinate Hillary Clinton, Barack Obama and billionaire Democratic supporter George Soros. Hopkins allegedly invited an FBI agent into his home in 2017 and showed him at least nine weapons, including an AK-47 assault rifle.

The FBI declined to comment on why it waited to bring charges against Hopkins at the time.

The United Constitutional Patriots set up their encampment in the New Mexico desert a few hundred feet away from the border at a time when large groups of families have been coming to the area from Central America. Many members of the group carry guns and wear masks.

Other militias and far-right activists have been stepping up their activity at the border in recent months, especially last year as a caravan of migrants made its way to the U.S. At the time, a Texas militia said it had members at three points along the state's border with Mexico.

United Constitutional Patriots spokesman Jim Benvie said in a social media post that the group will relocate and that operations will continue.

Sunland Police Chief Javier Guerra cautioned the group that it will take action against members who point guns at immigrants. "We can arrest them for assault," he said.