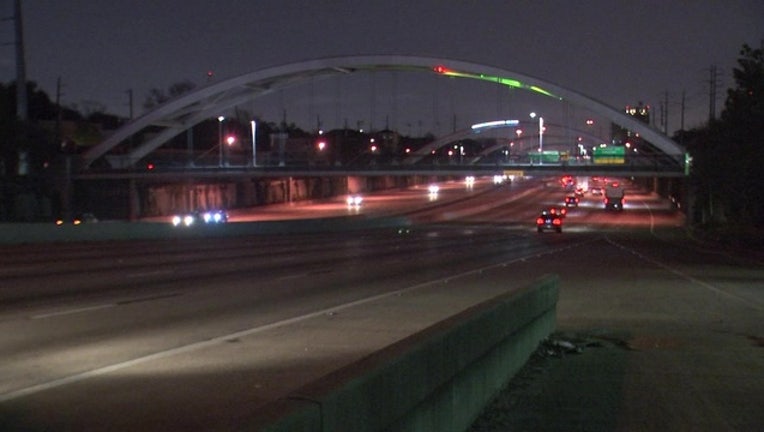 HOUSTON (FOX 26) - A joint effort among Houston Mayor Sylvester Turner, Reliant Energy, the Montrose Management District and Montrose district business owners and residents has provided the public support and funding to re-light the bridges over the Southwest Freeway at sunset on Saturday.

The bridge lights were turned off on Jan. 19 because the Montrose Management District could not pay the utility bill as the result of a temporary court order.

“We are incredibly humbled and honored to have our local community step forward with generous offers of donations and support to turn the bridge lights back on,” said Ben Brewer, executive director of the Montrose Management District. “These bridge lights are a powerful symbol of Houston’s unity, diversity and ingenuity and we are beyond delighted to turn them back on.”

Mayor Turner posted on Twitter on Friday that he would commit campaign funds to pay the overdue utility bill. He reached out to the Montrose Management District and offered his personal support to turn the bridge lights back on.

"Now we can indeed light the night with color again, thanks to a very quickly formed partnership," said Mayor Turner on Saturday. "It shows how the bright the results can be when Houstonians work together."

On the recommendation of a commercial property owner in Houston, the district set up a 501(c)3 account to accept donations strictly to pay the utility services necessary to light the bridges.

David Houston, a Montrose resident and owner of New Leaf Real Estate, was one of the first donors to a 501c3.

“When we learned of the situation, we quickly responded with support for the community so that the lights could illuminate the bridges for everyone to enjoy," said Elizabeth Killinger, president of Reliant and NRG Retail. "Houston is home to us and the lights, while relatively new, have been used to celebrate some of the city’s brightest moments – Super Bowl 51 and the Houston Astros' World Series win and we look forward to them lighting up the night again."

The district says contributions are tax deductible and can be made out to the "Bridge Lights Fund" c/o the Montrose Boulevard Conservancy, a registered 501 (c)3 not-for-profit, and mailed to the Montrose Management District at PO Box 22167, Houston, TX, 77227. They say all donations will be used solely for paying the utility bills required to light the Montrose Bridges.

"We hope this is a temporary situation, and it is my sincerest hope that we can get back to delivering the services that ensures Montrose remains a safe, clean and attractive place to live and do business,” Brewer commented.

The programmable LED bridge lights were first turned on for the Super Bowl in February 2017. Contractors rushed to turn the lights on for that landmark event and worked throughout 2017 to complete the lights and repair unforeseen technical challenges due to a rushed installation schedule. They were also lit in Astros colors for the World Series.

Mayor Turner said he understands the vital role that management districts play in enhancing local communities throughout Houston and that he hopes for an amicable resolution in the court case between the Montrose district and local residents.

The Montrose Management District describes itself as improving the quality of life in the historic Montrose area "through a service, improvement, and assessment plan to meet the needs of the District. The plan focuses on four core areas including: business and economic development, strategic planning, public safety, and visual and cultural improvements."