Family lost their home after tornado in northeast Texas

Homeowner Wes Brown in Powderly, Texas lost his home after a tornado tore threw the area on Friday evening but he's just glad his family is alive and safe.

POWDERLY, Texas - Wes Brown and his family are alive and blessed.

At least one of them hit in Powderly, Texas. A tornado whipped across the small community northeast of Dallas in Lamar County at 5:45 p.m. as the atmosphere became prime for rotating supercells.

Brown said he knew the storms were coming. He, along with his wife, two teenage sons and pets, took shelter in a reinforced interior closet inside their home when the storm hit. 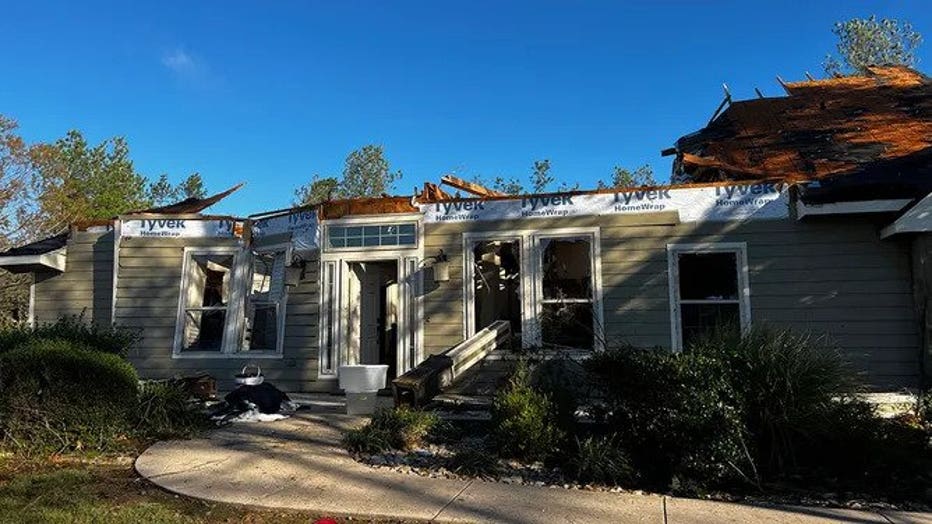 Wes Brown, along with his wife, two teenage sons and pets, took shelter in a reinforced interior closet inside their home when the tornado hit. (Photo Courtesy of Max Gorden / FOX Weather)

"The reason we're alive is because Jesus Christ," Brown said. "He spared us last night."

Packed inside the closet, Brown said he noticed when the wind started to change and blow, and as it hit, it became very loud as glass began to shatter.

"We didn't know exactly how bad it was until we stepped out, and that's when your life changes," he said.

After a severe storm devastated areas in northeast Texas, residents help push a stuck car as fallen trees block the roadways. (Video credit to @NaderNavigator on Twitter via Storyful)

As the sun came up Saturday morning, the sound of chainsaws could be heard echoing throughout the tight-knit community.

The Browns lost pretty much everything. Their home and nearby garage are destroyed. Every one of their vehicles were either totaled or are damaged.

"We're just trying to sift through. But it's things," Brown said. "I thank God that I have my wife and my children. So that's what's most important. And if it wasn't for him, it could have ended a whole lot differently."

Numerous friends and family arrived shortly after the storm to help the Browns with many coming back Saturday to begin to pick up the pieces and start the long road to recovery.

Standing in front of the rubbles that once sheltered Brown’s family from the storm is now too much to even take in.

Our severe storm threat remains elevated across SE Texas through the rest of today and especially tonight. Most of the area remains under a Category 2 out of 5 threat for severe weather with a higher Category 3 out of 5 risk in our northern communities. Between now and 7PM, there will be a threat for a few supercell storms that could produce damaging winds or a brief tornado. Then expect a line of storms to develop that will roll through between 9 PM and 2 AM Saturday. Damaging winds 58+ MPH will be possible with this line. So make sure you have the FOX 26 weather app downloaded and have the alerts for your area turned on. Weather calms down for World Series Game 6 Saturday evening with no rain expected downtown. Election Day Tuesday also looks quiet.

Knowing millions have stood once before where he stands today trying to find the things of importance, like close, pictures and valuables.

"Fifty years of stuff strung from here to who knows where," he said. "It's a lot to take in."

And at the same time, Brown wonders what to do about the insurance and where his family is going to live.

"Luckily, we are blessed to have family that live nearby. So, we stayed with my brother-in-law and sister-in-law last night," he said. "They opened our home to us and let us stay there just a few miles down the road."

The National Weather Service will be on the ground in Powderly on Saturday morning surveying the damage. A local judge declared a disaster in the area, one of the first steps toward getting additional help for the town.