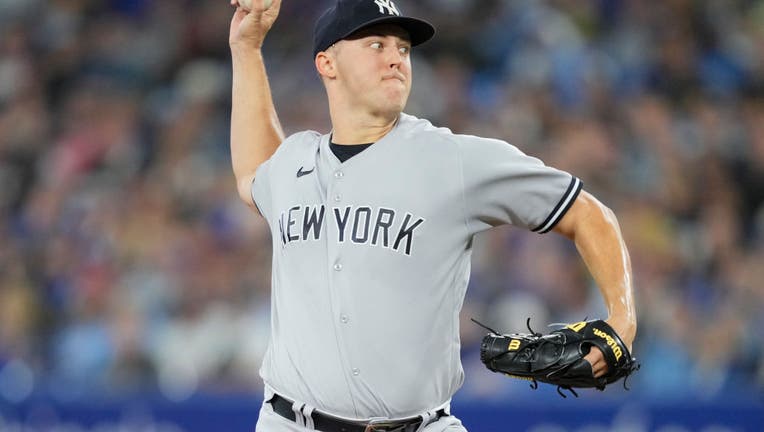 TORONTO, ON - SEPTEMBER 27: Jameson Taillon #50 of the New York Yankees pitches to the Toronto Blue Jays in the first inning during their MLB game at the Rogers Centre on September 27, 2022 in Toronto, Ontario, Canada. (Photo by Mark Blinch/Getty Ima

HOUSTON - Jameson Taillon, who is originally from The Woodlands, will be the starting pitcher for the New York Yankees in front of his hometown crowd against the Houston Astros at Minute Maid Park.

FOX 26 spoke with his father, Michael Taillon, about his son starting on Wednesday night in Game 1.

"It's exciting. For his to pitch game one at Minute Maid, hometown, and certainly against an absolutely great team. Certainly as a pitcher, it's gonna be a test for Jameson to pitch against the Astros."

FULL VIDEO: Father of Yankees starting pitcher talks with FOX 26 about his son starting game one of the ALCS against the Astros at Minute Maid Park on Wednesday.

"Certainly rewarding to see him get the ball game one against the Astros. My wife and I were talking about how neat it is that Roger (Clemens) is throwing the ball out tonight (ceremonial first pitch), an Astros and a Yankee, and someone that Jamo absolutely loved watching pitch when he was a little boy growing up. He even has a poster of Roger, signed by Roger. It's a lot of fun seeing all the pieces coming together. There's pitchers around I think when he was a 1st grader in an Astros uniform. He was a big Astros fan at that time."