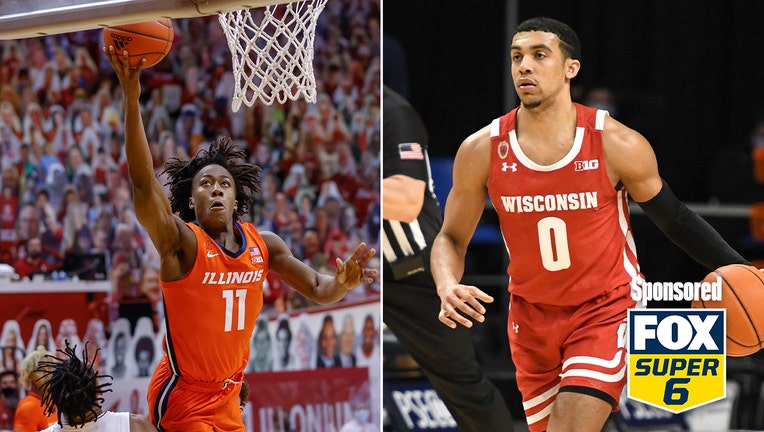 LEFT: Ayo Dosunmu #11 of the Illinois Fighting Illini puts up a shot but was called for an offensive foul against Armaan Franklin #2 of the Indiana Hoosiers. RIGHT: D'Mitrik Trice #0 of the Wisconsin Badgers dribbles the ball during a college basketb (Michael Hickey/Mitchell Layton/Getty Images)

When one conference can load six teams into the Top 25 and seek nine or ten NCAA Tournament bids, getting marquee battles is nothing new.

For Wisconsin and Illinois, however, it is still a huge measuring stick when you can match up against another one of your conference colleagues that are considered among the best in the country.

And that will happen again on Saturday when the Badgers travel to play the Illini in a stirring Big Ten contest (2:30 p.m. ET, FOX) for a huge mid-season matchup.

And that game could win you $1,000 when you play the FOX Super 6 on Saturday’s game. Just download the Super 6 app on your smart phone or tablet, predict the right answers to the six questions on this game and you could win $1,000. It’s that simple and best of all, it’s free.
Here’s the questions and how to look at it.

How many points will the top scorer for Wisconsin have?
0-14, 15-17, 18-20, 21-23, 24-26 and 27+
D’Mitrik Trice has been the leading scorer of a very balanced Badgers offense, averaging 13.3 points a game. Micah Potter is averaging 12.3 while three other Wisconsin player- Nate Reuvers, Aleem Ford and Brad Davidson all averaging over nine points a game.

Who wins: Wisconsin or Illinois?
Illinois’ last two wins have bene impressive ones against No. 7 Iowa and a road win at Indiana in overtime. There is more of a sense of urgency for the Illini, who needs to keep building its tournament resume going forward for a really high bid. Remember that the Badgers will get a rematch against the Illini at the Kohl Center later in the month.