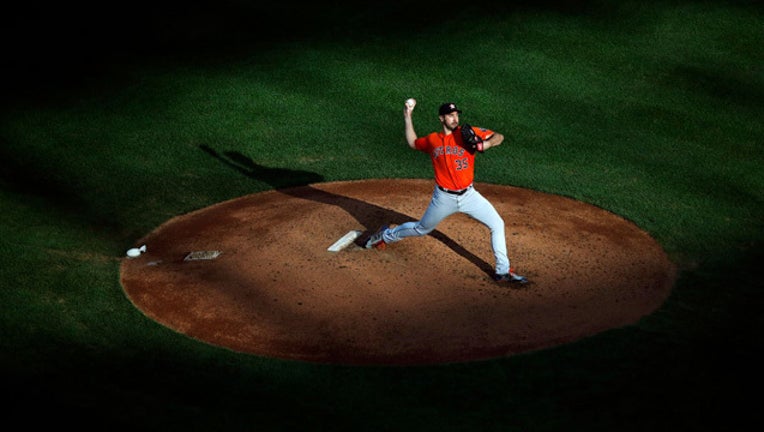 Starting pitcher Justin Verlander #35 of the Houston Astros pitches in the third inning against the Baltimore Orioles during Game One of a doubleheader at Oriole Park at Camden Yards on September 29, 2018 (Photo by Patrick McDermott/Getty Images)

BALTIMORE (AP) - Justin Verlander looked playoff-ready in a 10-strikeout performance, Carlos Correa homered and hit a tiebreaking RBI double in the ninth inning, and the Houston Astros beat the Baltimore Orioles 4-3 Saturday in the opener of a doubleheader.

Verlander made a case for his second AL Cy Young Award with a dominant outing that began with seven strikeouts over three perfect innings. The right-hander allowed three hits and walked one in six innings.

He left with the score 3-0, but the Houston bullpen gave away the lead.

The 35-year-old's next outing will come in the postseason, which begins for Houston on Friday against Cleveland.

DJ Stewart tied it with a three-run homer off Joe Smith in the seventh.

In the ninth, Springer drew a two-out walk from Sean Gilmartin (1-1) and Correa doubled into the gap in right-center.

Will Harris (5-3) worked the eighth and Hector Rondon got three outs for his 15th save.

It has been a strange September for Astros right-hander Charlie Morton, who has worked only 12 innings and celebrated the birth of his fourth child.

Morton left with shoulder discomfort after pitching only one inning against the Angels last Sunday. Then, on Thursday, his wife gave birth to a girl.

Morton will start on Sunday in the season finale. How far he goes is up in the air.

"I could see it going anywhere from one inning, two innings, maybe even three innings," manager A.J. Hinch said. "I need to be convinced that he feels like he's clear from the soreness to where we're not risking a ton."

Orioles outfielder Adam Jones is receiving an unofficial, tentative farewell from the fans at Camden Yards this weekend.

His contract expires after the season, and he is 33 years old on a team rebuilding with youth. Even if the Orioles ask him back, would he say yes?

Astros: Dallas Keuchel (12-11, 3.75 ERA) was slated to start the second game. Hinch said the lefty would only go three innings, to keep him sharp and get the bullpen some work before the playoffs.