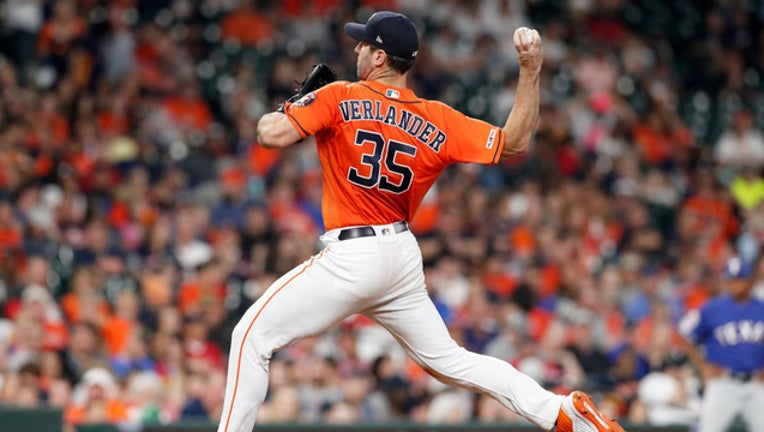 HOUSTON, TX - MAY 10: Justin Verlander #35 of the Houston Astros pitches in the sixth inning against the Texas Rangers at Minute Maid Park on May 10, 2019 in Houston, Texas. (Photo by Tim Warner/Getty Images)

HOUSTON (AP) - Justin Verlander continued his strong start to the season with arguably his best start of the year.

The only hit off Verlander (6-1) was a single by Asdrubal Cabrera to lead off the fifth.

"In a tight ballgame like that, you're kind of on edge the whole time," Verlander said. "One mistake could obviously lose you the ballgame. From the first inning through the seventh, it was a grind. The boys behind me did a great job."

Jake Marisnick homered in the third, and Yuli Gurriel and Robinson Chirinos hit back-to-back solo home runs with two outs in the seventh.

Astros star second baseman Jose Altuve exited in the first inning with left hamstring discomfort after beating out an infield single. He was listed as day to day.

Houston manager AJ Hinch said Altuve looked uncomfortable at first, and he was working to stretch his hamstring.

"He just said that he felt something in his left hamstring," Hinch said. "He's been evaluated. It doesn't seem serious. We don't know the extent of the injury until we get to tomorrow. He was frustrated, but he made the right decision to alert us of some soreness."

Verlander struck out eight, walked two and hit a batter.

"Big night for him," Hinch said. "He had command of his pitches. He had some stuff left in the tank, too. I think he could have gone out there for the eighth, so really encouraged that he was so in control yet so dominant."

Texas manager Chris Woodward said Verlander did a good job of mixing up his pitches.

"So many weapons," Woodward said. "He has command of all his pitches, he throws his slider off his fastball and can throw his curve at any time. He doesn't give you much to hit."

Ryan Pressly threw a perfect eighth. Roberto Osuna pitched around a single in the ninth for his 10th save, helped by Reddick.

A day after reaching over the wall to take away a go-ahead, three-run homer from Texas' Hunter Pence, Reddick leaped for a catch against the wall to rob Elvis Andrus of extra bases.

Carlos Correa helped Verlander in the third, making a diving snag of Ronald Guzman's hard grounder deep in the hole at short, popping up and getting the out at first.

"You don't know how that changes the game," Verlander said. "You don't know what happens after that. I know it's a big momentum shifter. A guy makes a play like that, and for me, against the other team, it's kind of deflating. It's just a huge momentum boost."

Lance Lynn (4-3) allowed three runs in seven innings, striking out eight. The three home runs Lynn gave up were as many as he had allowed in his previous seven starts combined this season.

"Everything but three pitches, and all three of those left the ballpark," Lynn said. "I gave up too many runs. You have to match Verlander, especially you saw early he was going good, so you knew you had to make pitches and try to keep them off the board."

Verlander passed Frank Tanana for 22nd on the all-time strikeouts list by fanning Rougned Odor in the seventh. He now has 2,774 strikeouts in his career.

"You look at tonight and you get beat by a Cy Young Award winner. That's part of the game, especially when he's one." - Lynn on the loss to Verlander.

Houston has hit 22 home runs in the last eight games. The Astros got home runs in the same game from the No. 7, 8 and 9 hitters in their lineup for the second time in franchise history. The other time was June 12, 2015, against the Mariners when Luis Valbuena, Chris Carter and Jason Castro connected.

Astros RHP Gerrit Cole (3-4, 4.17 ERA) will make his ninth start of the season, seeking his third straight win after allowing four runs in 6 1/3 innings in his last outing Monday against the Royals. The Rangers will start RHP Jesse Chavez (0-1, 7.27) on Saturday as an opener.