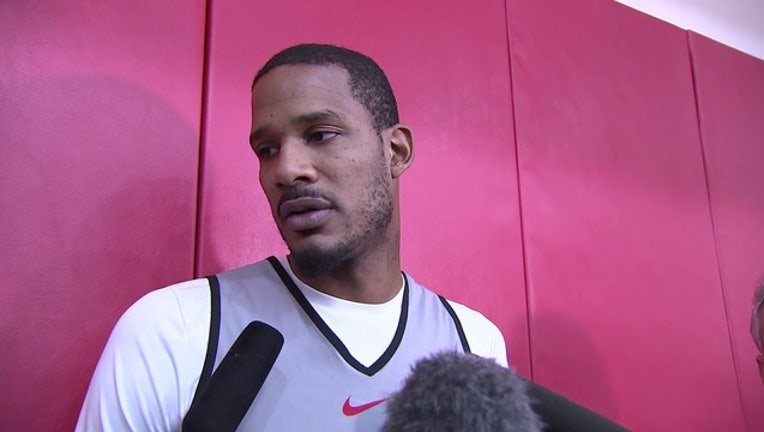 HOUSTON (AP) - Trevor Ariza scored a season-high 25 points in the Houston Rockets' 125-95 victory over the Denver Nuggets on Wednesday night.

Ariza was 7 of 10 from 3-point range. Chris Paul had 23 points and 12 assists, and James Harden added 21 points, nine assists and eight rebounds in limited action.

The Rockets have won nine of last 10 games, and beat Denver for the fifth straight time after sweeping the series 4-0 last season.

Houston led 75-40 at the half, the Rockets' largest halftime lead of the season.

In a scary moment for Denver midway through the second quarter, Nikola Jokic fell to the ground following a tipped layup after suffering a non-contact injury. He limped off the court to the locker room but returned later in the quarter.

Will Barton led Denver with 20 points. Jokic had 17, and Gary Harris added 13.

Denver played its second game without Paul Millsap. He sustained a left wrist injury Sunday in a loss to the Los Angeles Lakers and is out indefinitely. Starting in his place, Wilson Chandler returned to action after missing a victory Monday night at Sacramento with back pain.

Nuggets: Denver scored a season-low 17 points in the first quarter while allowing a season-high 75 first-half points. Denver's bench was outscored 41-35, led by nine points each from Juancho Hernangomez, Mason Plumlee and Malik Beasley. Harris had 13 points and four steals.

Rockets: Houston recalled rookie C Zhou Qi from Rio Grande Valley after he had 18 points and four blocks on Tuesday night for the G League affiliate. Briante Weber, who is averaging 17.9 points, 7.0 assists and 6.1 rebounds for Rio Grande Valley this season, was also recalled.

Rockets: At the New York Knicks on Saturday night.