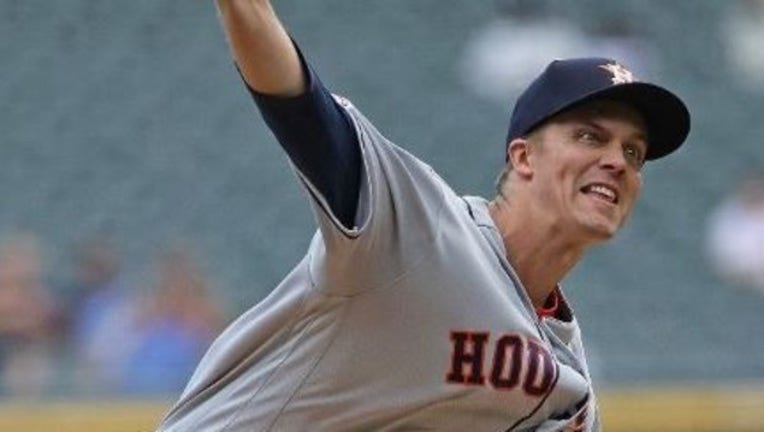 Alex Bregman had a go-ahead, three-run homer among his four hits to back Greinke, who won his third straight start since joining the Astros from the Arizona Diamondbacks at the July 31 trade deadline.

Greinke (13-4) went nine up, nine down on 25 pitches to start the game before allowing Marcus Semien's 21st homer - two days after Semien doubled to break up a perfect game bid by Justin Verlander.

Greinke allowed four hits and one run with three walks and six strikeouts. He became the 115th pitcher in major league history to reach 200 career wins, and the second in Houston's rotation along with Verlander.

Yuli Gurriel added an RBI double in the sixth for undermanned Houston, which had a two-man bench but snapped Oakland's four-game winning streak. The Astros went back ahead of the A's in the AL West race by 7 1/2 games.

Athletics lefty Brett Anderson (10-9) exited in the sixth with an injury. There weren't any updates on his condition before the game ended.

He allowed four runs on seven hits in five innings, struck out three and walked four in losing his second straight start and fourth in five.

Oakland saw its home winning streak end at six games, matching the club's season high. One more win will clinch a winning record at the Coliseum for a third consecutive season.

Fill-in right fielder Chad Pinder threw out Jose Altuve at home plate in the first after he reached on a two-base throwing error by Anderson.

Bregman singled in the first and ninth, doubled in the fourth and drew an 11-pitch walk in the seventh from Jake Diekman.

Roberto Osuna finished for his 27th save.

AGAINST THE AL WEST

The A's also had a five-game winning streak against division opponents snapped, their longest vs. the AL West all season.

Not that Oakland manager Bob Melvin is busy scoreboard watching yet at this relatively early stage - neither the division race nor the wild-card standings.

"I think that's a personal thing. I don't look at either right now," Melvin said. "We're just trying to win as many games as we can. We know we're quite a bit behind these guys, so every game we can win against them gets us a little bit closer. We're still in August. It's not until a little bit later in September 'til I start focusing on kind of where we are as far as the division and the wild card. Things flip around pretty quickly."

Astros: Placed INF Aledmys Díaz on the injured list after he began experiencing lightheadedness and dizziness on the team bus Saturday. All tests at a hospital came back fine. The Astros were hopeful he would rejoin the club to fly home with the team. ... RHP Cy Sneed was recalled to take Diaz's spot on the 25-man roster, never leaving the Bay Area after he had been optioned to Triple-A Round Rock on Saturday. ... RHP Brad Peacock (right shoulder) was activated from the injured list. ... While the Astros are listing TBA for their Thursday starter, they remain hopeful of Gerrit Cole making his next start after being scratched last Tuesday with discomfort in his right hamstring.

Athletics: RF Stephen Piscotty sat out a day after rolling his right ankle sliding into second base to get back safely on a pickoff attempt in the seventh. Melvin hopes Piscotty will be ready to return Tuesday after the team's day off Monday. ... Slumping slugger Khris Davis, the 2018 major league home run leader who is in an 0-for-13 funk, got a day off. Melvin wanted to get Jurickson Profar some at-bats at DH. ... CF Ramon Laureano, on the injured list with a stress reaction in his right shin, is closer to running again - but not yet every day. He has done everything in his rehab but run so far. ... LHP Sean Manaea was scheduled to pitch for Triple-A Las Vegas, moving another step closer to returning for the first time since shoulder surgery last September. He was set to throw upward of about 100 pitches.

Athletics: After the day off, 10-game winner Homer Bailey pitches the series opener at home against the New York Yankees on Tuesday night. He won 6-1 with the Royals in New York on April 18.