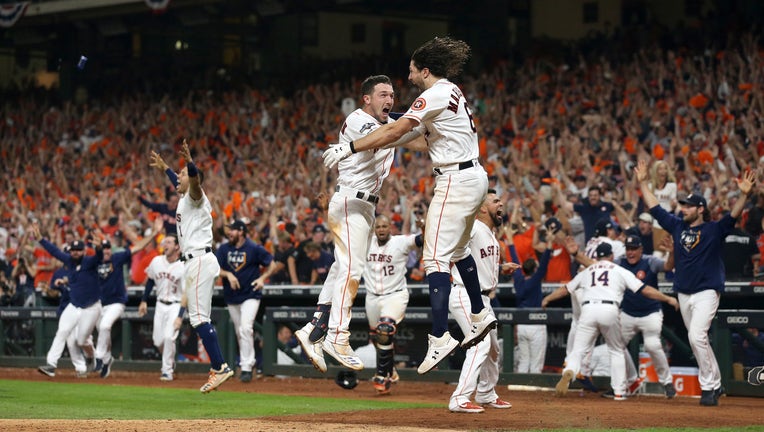 HOUSTON, TEXAS - OCTOBER 19: The Houston Astros celebrate their 6-4 win against the New York Yankees on a ninth inning walk-off home run by Jose Altuve (not pictured) in game six of the American League Championship Series at Minute Maid Park on Octob ( (Photo by Bob Levey/Getty Images) )

HOUSTON - The Houston Astros are in the World Series for the second time in three years. Tickets to the games are going for as much as $10,000. If you don't want to spend thousands of dollars, but still want to cheer on the team with a crowd, here are some places you can watch.

You can watch the World Series on FOX 26.

Away games at Minute Maid Park: Fans are invited to watch Astros postseason away games for free at Minute Maid Park during the Astros World Series Postseason Watch Parties. Fans can claim a free Postseason Watch Party voucher for entry at www.astros.com/watchparty. Limited vouchers will be available online, but fans can also walk-up on the event date and receive a free voucher at entry.

8th Wonder Brewery is hosting the WonderWorld Watch Party with drink specials. The game will play on the big screens and a 16-foot projector outside. (2202 Dallas Street, Houston, Texas 77003)

Christian's Tailgate Bar & Grill will host watch parties at five locations in Downtown, Midtown, the Heights, Energy Corridor and West U. They will have food and drink specials on game days.

Poitín Bar & Kitchen is hosting watch parties for every World Series game. They will have Happy Hour during each game with 50 percent off all bar snacks and drink specials. (2313 Edwards Street, Suite 100, Houston, Texas 77007)

Tookie’s in Kemah is hosting watch parties for the World Series games with baseball trivia in the bar, and food and drink specials. (406 Texas Avenue, Kemah, Texas 77565)