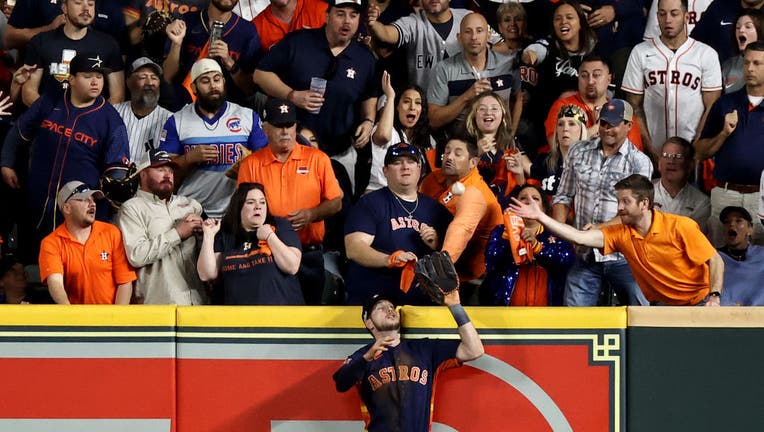 HOUSTON, TEXAS - OCTOBER 20: Kyle Tucker #30 of the Houston Astros makes a catch on a fly ball hit by Aaron Judge #99 of the New York Yankees (not pictured) during the eighth inning in game two of the American League Championship Series at Minute Mai

HOUSTON - The Houston Astros were leading Game 2 of the ALCS 3-2 in the 8th inning Thursday evening against the New York Yankees when the new American League single-season home run record holder Aaron Judge stepped to the plate, representing the go-ahead run.

Judge hit a fly ball deep into right field, looking perhaps like the Yankees had just taken the lead!

Alas, Astros outfielder Kyle Tucker hauled in the fly ball right near the top of the wall, leading to a loud out instead. The Astros would go on to win the game 3-2 to take a commanding 2-0 lead in the series.

After the game, Yankees manager Aaron Boone told the gathered press that he thought the wind may have knocked down Judge's ball and cost them the home run.

"The roof open kind of killed us," Boone was quoted as saying, according to FOX 26 Houston Sports Director Mark Berman. "I think it's a 390(-foot home run) ball."

Houston's Minute Maid Park has a retractable roof, but these days it is rarely opened; instead, the team and players opt for the temperature and wind-controlled environment of an enclosed stadium.  This season, out of 81 regular season home games and the three home playoff games prior to Thursday, only three featured a game with the roof open. Last season, only seven games were under the skies.

But Thursday's weather was nearly perfect -- temperatures in the 70s with comfortable humidity and no rain in the forecast. The roof was open.  There was a light to moderate breeze at times, though -- adding a new wrinkle to a field where the wind is rarely a factor.

According to the game's box score, the temperature at first pitch was 78 degrees, with a wind blowing out to left field at just 10 mph. Subsequent observations from Houston's Hobby Airport show temperatures dropped to around 70 degrees with winds around 14 mph by 9 p.m. -- roughly about the time of the 8th inning.

If anything, warmer temperatures would allow batted balls to travel a little farther, as warm air has less density. But past box scores note that temperatures inside Minute Maid Park are around 67 degrees when the roof is extended – a negligible difference from temperatures Thursday evening.

A south-to-southwest wind, as observed in the city, would indeed be blowing out toward the outfield, seemingly being an advantage to hitters. But wind can swirl inside a ballpark, especially a cavernous one with tall walls and structures such as Minute Maid Park.

And if indeed the wind had swirled in from right field, it could have stunted the ball's trajectory.

"If you get powerful winds and those winds are blowing out to center, it's literally carrying that home run ball farther, so you're going to see more home runs," RotoGrinders.com Meteorologist Kevin Roth told FOX Weather.

Conversely, wind can be a baseball player’s worst enemy.

"If you get the winds coming in from center and blowing towards the hitter, you can hit the ball really hard and that wind is just fighting it the whole way," Roth said. "What would have been a home run is all of a sudden just an easy out."

Or maybe a game or series-clinching out? Time will tell.

Roof open or not, some data showed had Judge been playing at home, that long out would have been a game-leading homer.

According to StatCast, while that ball Judge hit would have still been short of the wall in 29 MLB ballparks, Yankee Stadium would have been the exception.

The series shifts to Yankee Stadium for Games 3-5 starting Saturday where all three will be played outdoors exposed to whatever Mother Nature has to offer.