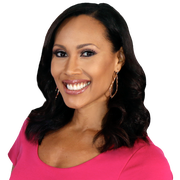 Lina de Florias joined FOX 26 Houston in September 2018 as the co-anchor of Wake Up! with Sally Mac & Lina. Before moving to Houston, Lina worked as a morning anchor in her hometown of Phoenix, Arizona for three years. Her junior year at Arizona State University, she represented her home state at the Miss USA Pageant. After graduating, she started her news career on the Gulf Coast, working as the primary anchor in Pensacola, Florida for five years.

Lina has covered tropical storms in Florida, immigration controversy in Arizona and has broken the sound barrier flying with the Blue Angels. Lina and her husband are "pup parents" to a Cavachon named Gertie Belle and enjoy running, music and food!