HOUSTON - UPDATE: Major League Baseball has announced that Game 3 of the World Series has been postponed. Game 3 will take place on Tuesday evening.

According to a press release from the MLB, the schedule has been revised due to the rain out.

Here is the updated schedule:

Friday, November 4 will be a travel day if necessary

Officials said tickets will remain valid for the game that is listed on your ticket.

First pitch for all games will be at 7:03 p.m. Central Time on your World Series station, FOX 26!

The Philadelphia Phillies and the Houston Astros square off in Game 3 of the World Series on Monday with the series tied 1-1.

The series began at Minute Maid Park in Houston where the Phillies won the first game 6-5, and the Astros took the second game 5-2.

The best-of-seven series continues in Philadelphia for the next three games. 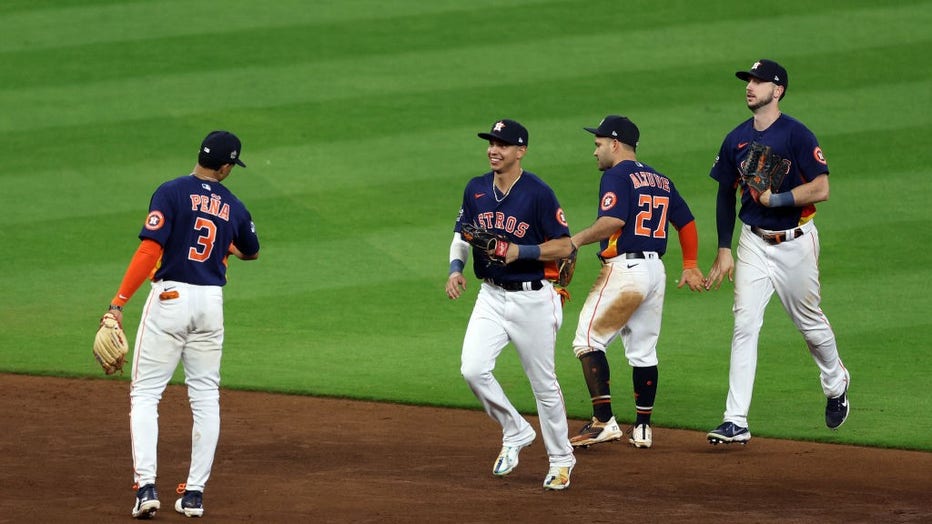 HOUSTON, TEXAS - OCTOBER 29: Members of the Houston Astros celebrate after a win over the Philadelphia Phillies in Game Two of the 2022 World Series at Minute Maid Park on October 29, 2022 in Houston, Texas. (Photo by Rob Carr/Getty Images)

Monday’s game is the sixth meeting between these teams this season. The Astros hold a 3-2 advantage in the season series.

How does an open roof or weather affect baseball?

Does an open roof affect a baseball game? How about the weather? FOX 26 Meteorologist John Dawson explains.

How to watch: What channel is the World Series game on?

All of the World Series games will air on FOX. Coverage begins at 5 p.m. on FOX 26 Houston.

Houston Astros fans Amber and Stephanie talk about how they started handing out hundreds of crowns at Minute Maid Park.

Who is pitching in World Series Game 3?

Noah Syndergaard is set to start for the Phillies against Lance McCullers Jr. and the Astros.