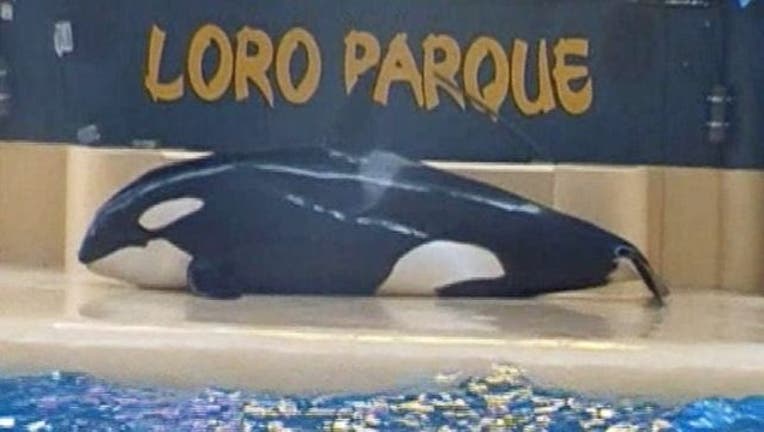 Morgan, a SeaWorld-owned orca, is seen on a concrete slab at Loro Parque, a theme park in Tenerife, Spain. (Courtesy Dolphin Project)

FOX NEWS - Video of a captive killer whale beaching herself for more than 10 minutes on a concrete slab has reignited animal activists in the fight to free marine mammals used as entertainment. But the theme park that keeps the mammal said it's "totally natural behavior."

The video, posted by Ric O’Barry’s Dolphin Project (a non-profit dedicated to the welfare and protection of dolphins that, when possible, aims to free captive sea mammals) last week, shows a SeaWorld-owned orca named Morgan lying motionless on the concrete at the side of her tank after performing in one of three daily shows at Loro Parque, a zoo and waterpark located in Tenarife, Spain. The incident occurred on May 16 and some of the tourists who witnessed the beaching say footage indicates the orca was trying desperately to kill herself.

Some visitors to the park were said to have taken selfies with the killer whale behind them while she lay on the concrete.

“Looks to me as if she's trying to take her own life, I don't blame her :(,” a commenter wrote under the video.

“Release the orcas!!! Their place is in the ocean!!! Shame on the humans who exploit them,” another wrote in French.