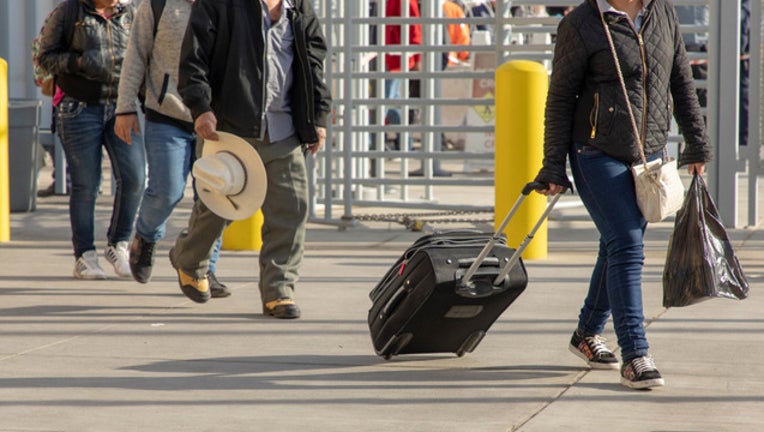 Processing at port of entry (Photos by Mani Albrecht/U.S. Customs and Border Protection)

WASHINGTON (AP) - U.S. Immigration and Customs Enforcement will begin voluntary DNA testing in cases where officials suspect that adults are fraudulently claiming to be parents of children as they cross the U.S.-Mexico border.

The decision comes as Homeland Security officials are increasingly concerned about instances of child trafficking as a growing number of Central American families cross the border, straining resources to the breaking point. Border authorities also recently started to increase the biometric data they take from children 13 and younger, including fingerprints, despite privacy concerns and government policy that restricts what can be collected.

Officials with the Department of Homeland Security wouldn't say where the DNA pilot program would begin, but they did say it would start as early as next week and would be very limited.

The DNA testing will happen once officials with U.S. Customs and Border Protection, which manages border enforcement, refer possible instances of fraud to ICE, which usually manages interior enforcement. But teams from ICE's Homeland Security Investigations were recently deployed to the southern border to help investigate human smuggling efforts.

The rapid DNA test will take about two hours and will be obtained using a cheek swab from both the adult and child. The parent is to swab the child, officials said.

The testing will be destroyed and won't be used as evidence in any criminal case, they said.

Generally, government officials determine a family unit to be a parent with a child. Fraud would occur if a person is claiming to be a parent when he or she is another type of relative, or if there was no relationship at all. ICE officials said they have identified 101 possible instances of fraudulent families since April 18 and determined one-third were fraudulent.

Since the beginning of the budget year, they say they have uncovered more than 1,000 cases and referred 45 cases for prosecution. The fraud could also include the use of false birth certificates or documents, and adults accused of fraud aren't necessarily prosecuted for it; some are prosecuted for illegal entry or other crimes.

Homeland Security officials have also warned of "child recycling," cases where they say children allowed into the U.S. were smuggled back into Central America to be paired up again with other adults in fake families - something they say is impossible to catch without fingerprints or other biometric data.

But the department hasn't identified anyone arrested in such a scheme or released data on how many such schemes have been uncovered. Advocates say they're worried that in the name of stopping fraud, agents might take personal information from children that could be used against them later.

DHS officials say the program will be done with existing funds. Earlier Wednesday, the White House said it would need an additional $4.5 billion in humanitarian aid for the border. The 2019 fiscal year budget already contained $415 million for humanitarian assistance at the border, including $28 million in medical care, senior administration officials said Wednesday.

But the White House now wants an extra $3.3 billion to increase shelter capacity for unaccompanied migrant children and for the feeding and care of families, plus transportation and processing centers.