The Pentagon released the first government photos and video clips of the nighttime operation, including one showing Delta Force commandos approaching the walls of the compound in which al-Baghdadi and others were found.

WASHINGTON (AP) - Two Islamic State militants from Britain were brought to the United States on Wednesday to face charges in a gruesome campaign of torture, beheadings and other acts of violence against four Americans and others captured and held hostage in Syria, the Justice Department said.

El Shafee Elsheikh and Alexanda Kotey are two of four men who were called “the Beatles” by the hostages because of the captors' British accents. The two men were expected to make their first appearance Wednesday afternoon in federal court in Alexandria, Virginia, where a federal grand jury issued an eight-count indictment that accuses them of being “leading participants in a brutal hostage-taking scheme” that resulted in the deaths of Western hostages, including American journalist James Foley.

The charges are a milestone in a yearslong effort by U.S. authorities to bring to justice members of the group known for beheadings and barbaric treatment of aid workers, journalists and other hostages in Syria.

Startling for their unflinching depictions of cruelty and violence, recordings of the murders were released online in the form of propaganda for a group that at its peak controlled vast swaths of Syria and Iraq.

RELATED: President Trump describes ISIS leader Abu Bakr al-Baghdadi as 'whimpering and crying' before dying in US operation: 'He died like a coward'

The case underscores the Justice Department's commitment to prosecuting in American civilian court militants captured overseas, said Assistant Attorney General John Demers. He said other extremists “will be pursued to the ends of the earth.”

The defendants' arrival in the U.S. sets the stage for arguably the most sensational terrorism trial since the 2014 criminal case against the suspected ringleader of a deadly attack on a U.S. diplomatic compound in Benghazi, Libya.

“If you have American blood in your veins or American blood on your hands, you will face American justice,” Demers, the department's top national security official, said at a news conference announcing the charges.

The men are charged in connection with the deaths of four American hostages — Foley, journalist Steven Sotloff and aid workers Peter Kassig and Kayla Mueller — as well as British and Japanese nationals who were also held captive. 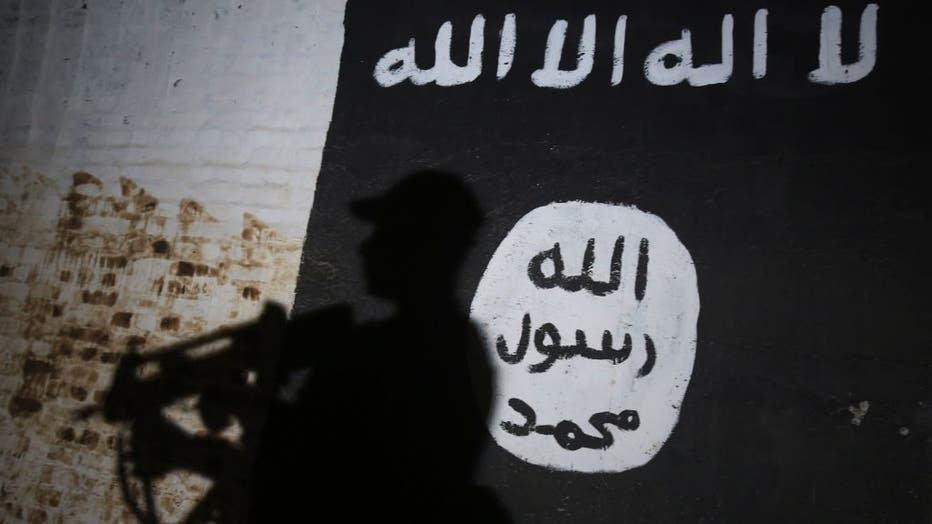 FILE - A member of the Iraqi forces walks past a mural bearing the logo of the Islamic State (IS) group in a tunnel that was reportedly used as a training centre by the jihadists, on March 1, 2017, in the village of Albu Sayf, on the southern outskir

The pair face charges of hostage-taking resulting in death and other terrorism-related counts. Because of a recent concession by the Justice Department, prosecutors will not be seeking the death penalty.

The indictment describes Kotey and Elsheikh, both of whom prosecutors say radicalized in London and set off for Syria in 2012, as “leading participants in a brutal hostage-taking scheme" that targeted American and European citizens and that involved murders, mock executions, shocks with electric tasers, physical restraints and other brutal acts.

The State Department declared Elsheikh and Kotey as specially designated global terrorists in 2017 and accused them of holding captive and beheading approximately two dozen hostages.

Prosecutors say the men worked closely with a chief spokesman for IS who reported to the group's leader, Abu Bakr al-Baghdadi, who was killed in a U.S. military operation last year. They were joined in the “Beatles” by Mohammed Emwazi, who was killed in a 2015 drone strike and was also known as “Jihadi John” after appearing and speaking in the videos of multiple executions, including Foley’s. A fourth member, Aine Lesley Davis, was sentenced to seven years in prison in Turkey in 2017.

The indictment accuses Kotey and Elsheikh of participating in Foley's 2012 kidnapping and of supervising detention facilities for hostages, “in addition to engaging in a long pattern of physical and psychological violence.”

They also coordinated ransom negotiations over email, saying the release of the hostages were conditioned on large sums of money or other concessions. In interviews while in detention, the two men admitted they helped collect email addresses from Mueller that could be used to send out ransom demands. Mueller was killed in 2015 after 18 months in IS captivity.

In July 2014, according to the indictment, Elsheikh described to a family member his participation in an IS attack on the Syrian Army. He sent the family member photos of decapitated heads and said in a voice message, “There’s many heads, this is just a couple that I took a photo of.”

The 24-page indictment does not spell out any specific role for Kotey and Elsheikh in any of the executions of the four Americans. But G. Zachary Terwilliger, the U.S. attorney for the Eastern District of Virginia, whose office will prosecute the case, said under U.S. law Elsheikh and Kotey can “be held liable for the foreseeable acts of their co-conspirators.”

Relatives of the four slain Americans praised the Justice Department for transferring the men to the U.S. for trial, saying the transfer “will be the first step in the pursuit of justice for the alleged horrific human rights crimes against these four young Americans.”

“We are hopeful that the U.S. government will finally be able to send the important message that if you harm Americans, you will never escape justice. And when you are caught, you will face the full power of American law,” the statement said.

Elsheikh and Kotey have been held since October 2019 in American military custody after being captured in Syria one year earlier by the U.S.-based Syrian Democratic Forces. The Justice Department has long wanted to put them on trial, but those efforts were complicated by wrangling over whether Britain, which does not have the death penalty, would share evidence that could be used in a death penalty prosecution.

Attorney General William Barr broke the diplomatic standoff this year when he promised the men would not face the death penalty. That prompted British authorities to share evidence that U.S. prosecutors deemed crucial for obtaining convictions.