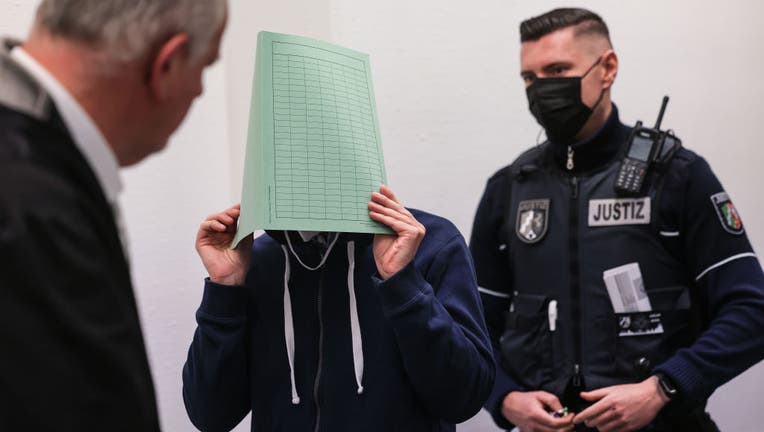 06 December 2022, North Rhine-Westphalia, Cologne: The defendant (M) in the Wermelskirchen abuse complex holds a folder in front of his face as he enters the courtroom next to his lawyer Christian Lange (l). The man allegedly offered himself as a bab

A 45-year-old German man who had offered babysitting services online went on trial Tuesday in the western city of Cologne accused of almost 100 counts of child sexual abuse.

Prosecutors told the Cologne regional court that the man documented the abuse of babies, children and teenagers, and shared videos and images of "unimaginable brutality" with dozens of people, German news agency dpa reported.

Investigators who discovered vast amounts of incriminating data last year at the married man's home, in the town of Wermelskirchen, said at the time that they had never previously "encountered such a level of inhuman brutality and callous indifference to the suffering of young children."

Prosecutors are seeking a sentence of 15 years imprisonment followed by continued security confinement if the man, whose name wasn't released for privacy reasons, is convicted.

In a separate case Tuesday, four men were convicted by a court in Frankfurt for their involvement in an online platform known as "Boystown," which was used to spread images of child sexual abuse.

A 49-year-old man and a 42-year-old man were sentenced to 12 and 10 years in prison, respectively. The court also ordered them to be detained after the end of their term, Frankfurt prosecutors said.

A 60-year-old German man who was arrested sitting at his computer in Paraguay was sentenced to eight years in prison for his role in operating the darknet site. A 66-year-old man from Hamburg, who was considered a particularly active user, received a seven-year sentence, officials said.

The verdicts can be appealed.

The Boystown site was a major international platform for child sexual abuse images with more than 400,000 members before it was taken down last year.

Authorities are working to identify further users of the site and bring them to trial.