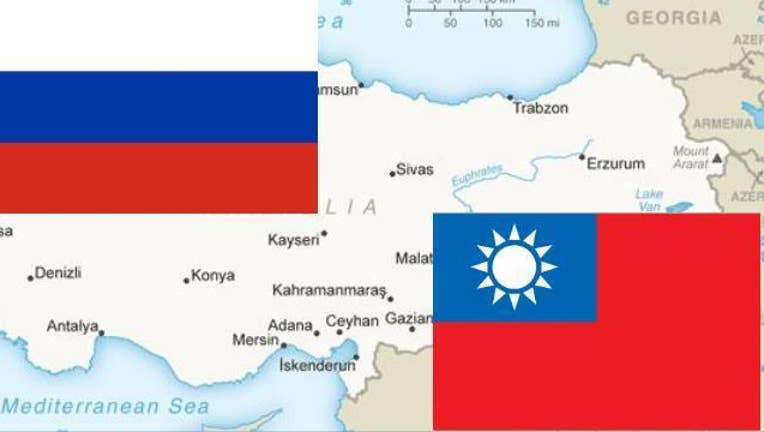 ANKARA, Turkey (AP) — Turkey's prime minister vowed Monday to take all necessary measures to protect the nation's borders from violation after a Russian fighter jet entered its airspace over the weekend, prompting Turkey to scramble jets and summon the Russian ambassador in protest.

NATO said another Russian jet intruded into Turkey's airspace Sunday, and it called urgent consultations on the issue. The alliance strongly protested the Russian violations and noted "the extreme danger of such irresponsible behavior."

Russia admitted to the first incursion Saturday, but said it intruded "by mistake" and assured Ankara it wouldn't happen again, Turkish Prime Minister Ahmet Davutoglu said in a televised interview. However, a senior U.S. official said the Obama administration doesn't believe the Russian incursion was an accident, and officials are in urgent talks with allies about what to do. Neither country spoke about the second incident.

The U.S. official wasn't authorized to publicly discuss sensitive military matters and spoke on condition of anonymity. In Madrid, U.S. Defense Secretary Ash Carter said Monday that Washington is conferring with Turkish leaders about the infringement.

The incident comes amid Turkish concerns over Russian airstrikes in Syria that have targeted some foreign-backed insurgents. Turkey and Russia also have conflicting positions on the Syrian government, with Russia backing President Bashar Assad and Turkey insisting on his ouster.

Turkish Prime Minister Ahmet Davutoglu said during an interview with Haber Turk television that NATO-member Turkey would enforce its rules of engagement if its airspace is violated. Those rules call for the treatment of any element approaching the Turkish border from Syria as an enemy.

"The Turkish armed forces have their orders," he said. "The necessary will be done even if it's a bird that violates Turkey's border ... Our rules of engagement are clear."

A Foreign Ministry statement said Monday that a Russian warplane entered Turkey's airspace near the town of Yayladagi, in Hatay province on Saturday. Two F-16 jets intercepted the Russian aircraft and forced it to fly back into the Syrian airspace.

Also Monday, Turkey's military said a MIG-29 jet had harassed two Turkish F-16s for five minutes and 40 seconds on Sunday by locking its radar onto them. In a brief statement, the military said the incident occurred while 10 F-16s were patrolling the Turkish-Syrian border. The military said it didn't know which country the MIG-29 belonged to.

Turkey summoned the Russian ambassador and demanded that Russia avoid future infringements, the Foreign Ministry statement said. It warned that Russia would be held "responsible for any undesired incident," that may occur. The same message was also relayed to Russian Foreign Minister Sergey Lavrov by telephone.

NATO Secretary-General Jens Stoltenberg expressed solidarity with Turkey and said the situation would be taken up at a meeting later on Monday. Davutoglu was also scheduled to chair a security meeting in Ankara in the evening.

"I call on Russia to fully respect NATO airspace and to avoid escalating tensions with the Alliance," Stoltenberg said.

"I urge Russia to take the necessary steps to align its efforts with those of the international community in the fight against ISIL," he added, using an alternative acronym of the Islamic State group.

Davutoglu told Haber Turk television that Russia assured Turkey that the airspace would not be violated again.

"The information we got from Russia this morning is that it was an incident that occurred by mistake," he said. "They said they are respectful of Turkey's borders and that it would not happen again."

Last week, Turkey issued a joint statement with its allies involved in the U.S.-backed campaign against the Islamic State group asking Moscow to cease attacks on the Syrian opposition and to focus on fighting the IS.

On Sunday, President Recep Tayyip Erdogan said the Russian airstrikes were unacceptable and a grave mistake that could alienate Moscow in the region.

Russia says the airstrikes that began Wednesday are targeting the Islamic State group and al-Qaida's Syrian affiliate, but at least some of the strikes appear to have hit Western-backed rebel factions.

Lolita C. Baldor in Madrid and Lorne Cooke in Brussels contributed to this report.