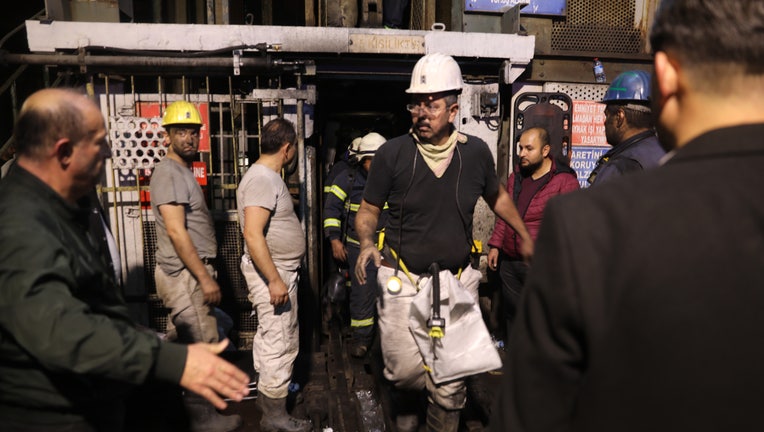 Rescue works continue for the coal miners, who are trapped under the rubbles, at the explosion site of a coal mine in Turkiye's northern Bartin province on October 15, 2022. (Photo by Kahraman Bekcili/Anadolu Agency via Getty Images)

Funerals for miners killed in a coal mine explosion in northern Turkey began Saturday as officials raised the death toll to at least 40 people.

Desperate relatives had waited all night in the cold outside the state-owned Turkish Hard Coal Enterprise's (TTK) mine in the town of Amasra, in the Black Sea coastal province of Bartin, hoping for news. There were 110 miners working several hundred meters below ground when the explosion occurred Friday evening.

Their wait turned to devastation by Saturday noon. Women cried at the funeral of miner Selcuk Ayvaz, whose coffin was wrapped in the red and white Turkish flag.

Turkish President Recep Tayyip Erdogan arrived at the scene after tweeting that any neglect of safety measures would be punished.

Interior Minister Suleyman Soylu said Saturday that 40 miners were confirmed dead. Eleven were injured and hospitalized, with five in serious condition, while 58 others managed to get out of the mine on their own or were rescued unharmed. The status of one remaining miner was unclear.

Energy Minister Fatih Donmez said rescue efforts were almost complete. Earlier he had said that a fire was still burning in the mine's gallery where more than a dozen miners had been trapped. Work to isolate and cool the fire continued, he said.

A view from the explosion site of a coal mine as the smoke accumulated in the mine is discharged through ventilation shafts in Turkiye's northern Bartin province on October 15, 2022. (Photo by Selim Bostanci/Anadolu Agency via Getty Images)

Preliminary assessments indicated that the explosion was likely caused by firedamp, which is a reference to flammable gases found in coal mines, Donmez said overnight. Three prosecutors were investigating the blast.

A miner who works the day shift said he saw the news and hurried to the site to help with the rescue. "We saw a frightful scene, it cannot be described, it's very sad," said Celal Kara, 40. "They're all my friends... they all had dreams," the miner of 14 years told The Associated Press after exiting the mine, his face covered in soot.

Ambulances were on standby at the site. Rescue teams were dispatched to the area, including from neighboring provinces, Turkey’s disaster management agency, AFAD, said. Dark smoke rose from the entrance of the mine which is surrounded by forests.

A mining technician from TTK told broadcaster NTV that his team of rescue and occupational safety personnel arrived at the site Friday night. Ismail Cetin said they went down into the mine and walked some 2.5 kilometers (1.5 miles) with their kit and stretchers. They recovered nine bodies, whom he called "mine martyrs."

Neighboring countries offered their condolences to Turkey. Greece’s prime minister offered rescue assistance even though relations between the two neighbors have recently been particularly tense.

Separately, the Turkish police headquarters said in a statement that legal action would be taken against 12 people who allegedly shared provocative content about the mine explosion to incite hate on social media.

Turkey’s worst mine disaster was in 2014, when 301 miners died after a fire erupted inside a coal mine in the town of Soma, in the west of the country. Only five months later, 18 miners were killed in central Karaman province after a flood in a coal mine.