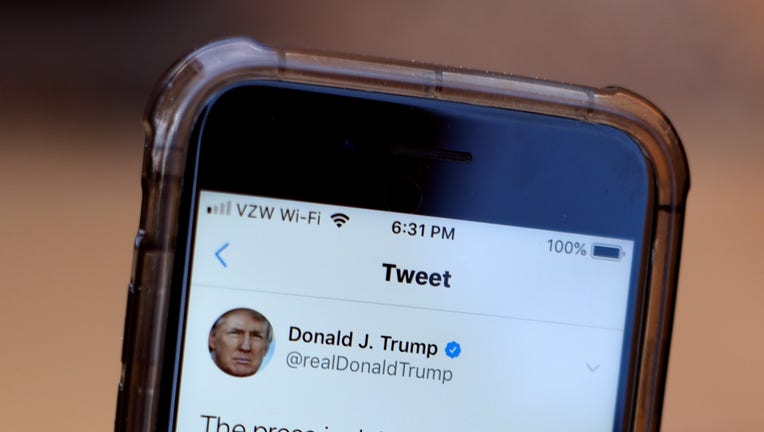 SANTA FE, NEW MEXICO - APRIL 7, 2019: A man reads a tweet from U.S. President Donald Trump on his iPhone which is highly critical of the American press which he calls 'the enemy of the people'. (Photo by Robert Alexander/Getty Images)

WASHINGTON - President Donald Trump set a presidential record for activity on his favorite social media platform Wednesday, tweeting and retweeting at length about the Senate impeachment trial, the Democrats who want to replace him and much, much more.

By 4:25 p.m. ET, Trump had barreled through his previous record of 123 Twitter postings in a day that he set a little over a month ago, according to Factba.se, a service that compiles and analyzes data on Trump’s presidency.

Trump’s previous record for tweets on a single day during his time in the White House was set on Dec. 12, 2019, the day the House Judiciary Committee opened its marathon session to approve two articles of impeachment against the president.

Trump’ set his all-time record for tweets in a day before he became president, with 161 posts in January 2015, according to Factba.se. Most of his tweeting that day was dedicated to plugging his reality television show.

Trump, who began his day in Davos, Switzerland, where he was attending the World Economic Forum, started his Wednesday morning by hammering out 41 tweets between 12 a.m. and 1 a.m. ET (6 a.m. to 7 a.m. in Davos).

The vast majority of his postings to his more than 71 million followers were retweets of messages, videos and images from Republican lawmakers and other backers haranguing Democrats over the impeachment trial.

His barrage of tweets included plenty of incendiary posts excoriating Rep. Adam Schiff, one of the House Democratic impeachment managers, and a retweet of a provocative image posted by White House social media director Dan Scavino that shows Trump walking in front of a fiery scene meant to symbolize the incineration of the “Deep State.”