WASHINGTON - In the waning hours of his presidency, Donald Trump left the nation’s capital Wednesday morning ahead of the inauguration of President-elect Joe Biden.

Accompanied by first lady Melania Trump, the president departed the White House shortly after 8 a.m. ET. He told the press pool waiting by the White House lawn that being president has been the honor of his lifetime.

RELATED: ‘We did what we came here to do’: Trump bids farewell to White House in video

The Trumps waved as they boarded Marine One for the final time and took a flight over the capital city that is already staged for Wednesday’s inauguration.

They landed at Joint Base Andrews in Maryland, where Air Force One was waiting to carry them to Mar-a-Lago in Palm Beach, Florida.

Four U.S. Army cannons greeted the Trumps with a 21-gun salute before Trump delivered final remarks to a small batch of supporters.

Before boarding Air Force One for the final time, President Donald Trump delivered his final remarks from Joint Base Andrews.

Melania Trump also spoke briefly, saying her time as first lady has been her greatest honor.

"Thank you for your love and your support. You will be in my thoughts and prayers. God bless you all. God bless your families. And God bless this beautiful nation. Thank you," she said.

Trump departs White House as his term comes to an end

President Donald Trump departed the White House for the final time Wednesday morning, hours before his term came to an end.

Echoing his message in his farewell video on Tuesday, Trump touted his administration as "a great success," claiming that the incoming administration has a "foundation to do something really spectacular."

"I wish the new administration great luck and great success. I think they'll have great success. They have the foundation to do something really spectacular," Trump added. 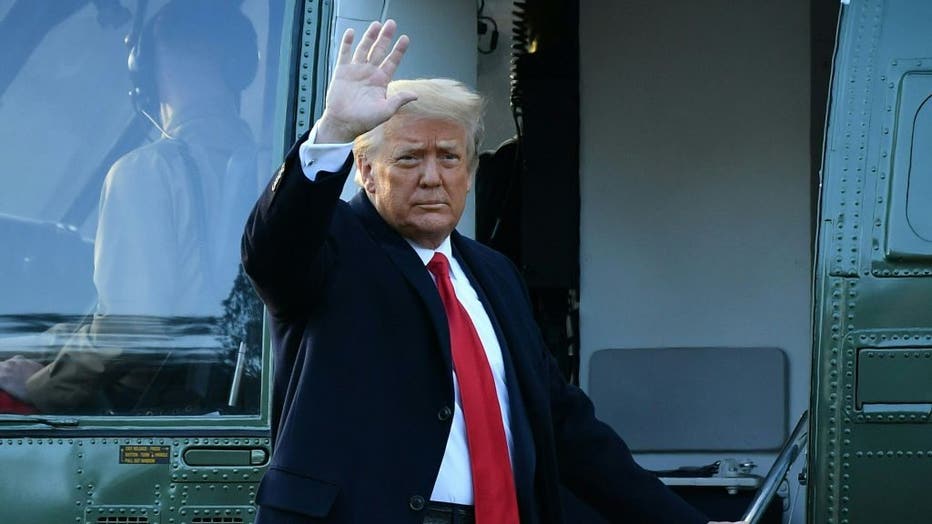 Outgoing US President Donald Trump waves as he boards Marine One at the White House in Washington, DC, on January 20, 2021. (Photo by MANDEL NGAN/AFP via Getty Images)

The crowd chanted "Thank you, Trump" and "We love Trump" as he spoke.

"People have no idea how hard this family worked. They could have had a much easier life, but they did a fantastic job," Trump said of his family.

He concluded by telling onlookers to "have a good life" and promised to see them soon.

Before walking off the stage to The Village People’s "YMCA," a song popular at his campaign rallies, he promised to "be back in some form."

The Trumps will land in Florida before Biden takes the oath of office. Air Force one will then head back to Washington.

This story was reported from Atlanta. Kelly Hayes contributed to this report.