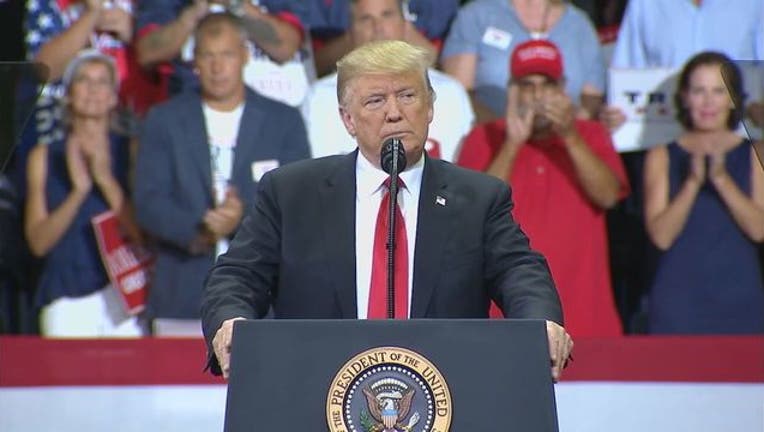 Trump will crisscross the nation, landing him in Senate battlefields such as Indiana, Missouri and Florida along with nail-biter contests for governor in Georgia and Ohio.

Winfrey, who offered crucial support to President Barack Obama during his 2008 rise, will campaign Thursday for Georgia Democratic gubernatorial candidate Stacey Abrams, who is attempting to become the nation's first black female governor.

Obama plans to campaign Friday for Abrams in Atlanta and in Miami to boost Florida Sen. Bill Nelson and Tallahassee mayor Andrew Gillum, who is running for governor. On Sunday, the former president will be in Gary, Indiana, for Sen. Joe Donnelly, who is among the most endangered Senate Democrats, and in his hometown of Chicago for J.B. Pritzker, who is the favorite in Illinois' race for governor.

Democrats are defending several Senate incumbents in Republican-leaning states in their quest to narrow the GOP's 51-49 majority. The terrain is more favorable in the House, where Democrats need a net pickup of 23 seats to recapture the majority, and in several states with vulnerable Republican governors.

Trump slammed outgoing House Speaker Paul Ryan, R-Wis., tweeting that Ryan "should be focusing on holding the Majority" instead of weighing in on the president's push to end the Constitution's guarantee of birthright citizenship.

Trump tweeted that Ryan shouldn't offer "his opinions on Birthright Citizenship, something he knows nothing about!"

Trump has said he can end the right to citizenship for babies born to non-U.S. citizens on American soil with an executive order. And he has argued that the right isn't covered by the 14th Amendment, even though the text of the constitutional amendment says that "all persons born or naturalized" in the U.S. are citizens.

Ryan, who is retiring, said Tuesday that Trump couldn't "end birthright citizenship with an executive order."

Former Rep. Ron DeSantis suggested during a rally with President Donald Trump that his Democratic opponent in the race for Florida governor should be impeached over ethics questions in his role leading the city of Tallahassee.

DeSantis criticized his Democratic opponent, Tallahassee Mayor Andrew Gillum, at length during his speech at the rally, bringing up an ongoing ethics investigation involving Gillum.

Gillum has asserted he paid his way on trips to Costa Rica and New York City, but newly released documents appear to contradict him.

Gillum has steadfastly denied any wrongdoing in the ethics probe, which is separate but related to an ongoing FBI investigation into city government.

DeSantis said maybe Gillum should be impeached. That prompted the crowd to chant, "Lock him up. Lock him up."

The Libertarian candidate in Montana's Senate race threw his support behind Republican Matt Rosendale in response to an election mailer from an unknown group that appears aimed at undermining Rosendale's support among conservatives.

Rick Breckenridge said Wednesday that he doesn't know the source of the mailer promoting him as a "true conservative" and claiming that Rosendale supports using drones to spy on private citizens.

Breckenridge said it was an attempt by so-called dark money groups to influence Montana's election. He said he has decided to back Rosendale, who is in a tight race against two-term Democratic Sen. Jon Tester.

The mailer is reminiscent of tactics used by Democratic-friendly groups in Tester's 2012 race to promote the Libertarian candidate and peel away Republican voters.

Vice President Mike Pence said during a stop in Ohio that the caravan of Central Americans walking toward the U.S. southern border represents "an assault on our country" and Republicans are "determined to end this crisis of illegal immigration once and for all."

An estimated 4,000 Central American migrants have been walking across Mexico toward the U.S. border. The Defense Department has authorized the deployment of 5,200 troops to help along the U.S. border.

Pence was accompanied by Jared Kushner, Trump's son-in-law and senior adviser, for a rally attended by several hundred people inside a hangar at an airport in Mansfield, Ohio.

It was aimed at helping Ohio Attorney General Mike DeWine, who is running for governor, Senate candidate Jim Renacci and Republican members of Congress.

Federal judges ordered Ohio to allow voters who had been purged for not voting over a six-year period to participate in this year's election.

A divided 6th U.S. Circuit Court of Appeals panel granted an emergency motion sought by voting-rights groups. The ruling overturned in part an Oct. 10 ruling by a federal judge that said voters haven't been illegally purged from Ohio's rolls.

Plaintiffs, led by the A. Philip Randolph Institute, lost their broader challenge in June to Ohio's election administration process as unconstitutional. The U.S. Supreme Court ruled in favor of Ohio's practices.

Republican Secretary of State Jon Husted said he wouldn't fight the order, aiming to avoid "an unnecessary source of contention with election only five days away."

Pelosi, who was the nation's first female House speaker, could be in position to reclaim the gavel in House leadership elections after the midterms.

More than 3.4 million people in Florida have already voted, surpassing the number who voted early or by mail four years ago.

New statistics released Wednesday by the state Division of Elections show registered Republicans still have the edge, casting 1.43 million ballots compared to nearly 1.37 million by registered Democrats. More than 592,000 voters with no party affiliation have voted.

During the last midterm election, nearly 3.19 million Floridians cast their ballots before Election Day. More than 6.6 million voted early or voted by mail in the 2016 presidential election.