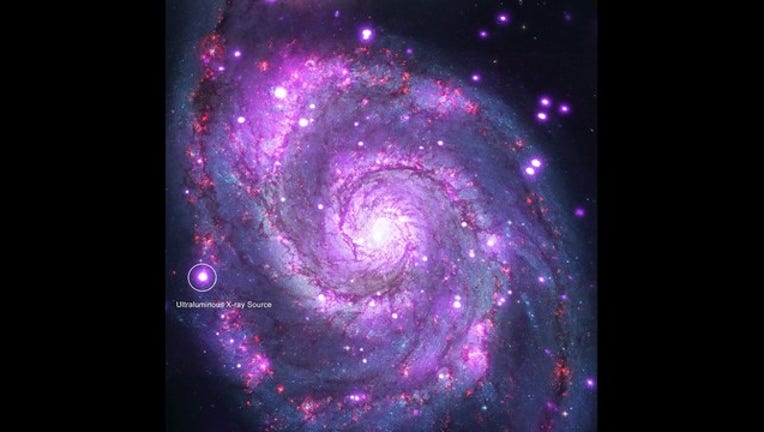 NASA - In the 1980s, scientists started discovering a new class of extremely bright sources of X-rays in galaxies. These sources were a surprise, as they were clearly located away from the supermassive black holes found in the center of galaxies. At first, researchers thought that many of these ultraluminous X-ray sources, or ULXs, were black holes containing masses between about a hundred and a hundred thousand times that of the sun. Later work has shown some of them may be stellar-mass black holes, containing up to a few tens of times the mass of the sun.

In 2014, observations with NASA's NuSTAR (Nuclear Spectroscopic Telescope Array) and Chandra X-ray Observatory showed that a few ULXs, which glow with X-ray light equal in luminosity to the total output at all wavelengths of millions of suns, are even less massive objects called neutron stars. These are the burnt-out cores of massive stars that exploded. Neutron stars typically contain only about 1.5 times the mass of the sun. Three such ULXs were identified as neutron stars in the last few years. Scientists discovered regular variations, or "pulsations," in the X-ray emission from ULXs, behavior that is exhibited by neutron stars but not black holes.

Now, researchers using data from NASA's Chandra X-ray Observatory have identified a fourth ULX as being a neutron star, and found new clues about how these objects can shine so brightly. The newly characterized ULX is located in the Whirlpool galaxy, also known as M51. This composite image of the Whirlpool contains X-rays from Chandra (purple) and optical data from the Hubble Space Telescope (red, green, and blue). The ULX is marked with a circle.