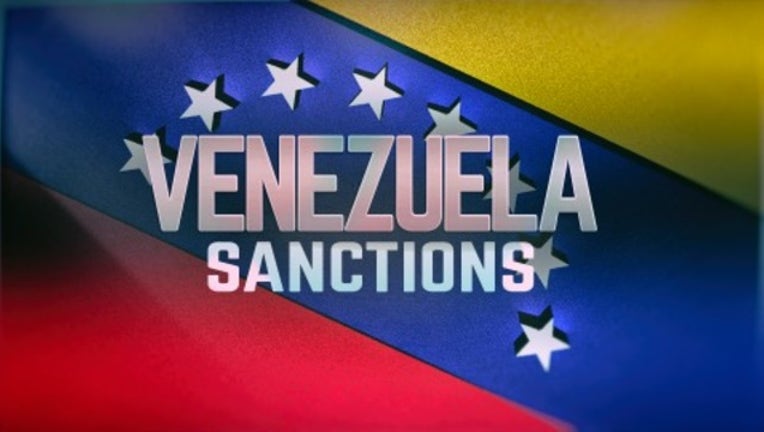 The Treasury Department says that firms have until May 10 to wind down and close their business with PDVSA.

PDVSA was hit with U.S. sanctions on Jan. 28 in a step that caught some American companies by surprise. The sanctions had the effect of stranding several oil tankers at and near Venezuelan ports because their cargoes were unable to be legally paid for.

Treasury said Friday the extension will allow certain financial contracts agreed upon before Jan. 28 to be completed.

Power has begun returning to some parts of Venezuela's capital.

Pro-government state broadcaster VTV reported that electricity had been restored to 16 neighborhoods around Caracas.

That account could not be immediately verified, though some Venezuelans on social media began reporting they had power. Streetlights could also be seen turning on in a Caracas neighborhood.

However, the lights in one office building flickered on and then turned off.

The South American nation is experiencing its most prolonged blackout yet after the power went out early Thursday evening.

The lack of electricity is adding to mounting tensions over the political standoff between President Nicolas Maduro and the opposition.

Much of the nation of 31 million people was still without electricity as the blackout stretched into a second day and patience began to wear thin.

"This has never happened before," a frustrated Orlando Roa, 54, said, decrying President Nicolas Maduro's administration for failing to maintain the electrical system and letting qualified engineers leave the country. "This is the fault of the government."

The blackout was reported to have hit 22 of 23 states, striking during the peak of evening rush hour Thursday, sending thousands of people on long nighttime treks home through some of the world's most violent streets. Maduro ordered schools and all government entities closed and told businesses not to open to facilitate work crews trying to restore power.

By early Friday afternoon, residents and pro-government state broadcaster VTV reported that power was starting to return to parts of Caracas. The stoplights in several neighborhoods were back on while in one office building the electricity flickered to life and then turned off.

Venezuela's socialist government blamed the power failure on right-wing extremists taking orders from the United States, including Florida Republican Sen. Marco Rubio, and said they were intent on causing pandemonium for several days but offered no proof.

"The electricity war declared and directed by the imperialist United States against our people will be overcome!" President Nicolas Maduro wrote on Twitter in his few public remarks on the outage. "No one can defeat the people of Bolivar and Chavez. Maximum unity patriots!"

U.S. Secretary of State Mike Pompeo shot back saying only Maduro was to blame.

"Maduro's policies bring nothing but darkness," Pompeo wrote on social media. "No food. No medicine. Now, no power. Next, no Maduro."

The outage comes as Venezuela is in the throes of a political struggle between Maduro and opposition leader Juan Guaido, the head of congress who declared himself the nation's rightful president in January and is recognized by the United States and about 50 other nations.

Without power to charge cell phones, normally hyper-active social media was eerily quiet. Those who managed to get a signal used the hashtag #SinLuz - meaning without light in English - to share images of cities throughout the country that on Friday resembled ghost towns.

One user posted a video of a nurse manually pumping air into the lungs of an infant. Others posted photos of long lines of cars queuing up at gas stations in hopes of getting fuel. A man anguished that he'd gone 17 hours without hearing from his mother.

"What impotence!" he lamented.

Netblocks, a non-government group based in Europe that monitors internet censorship, said online connectivity data indicates the outage is the largest in recent record in Latin America. The observatory warned Friday that some of the remaining networks were starting to fall offline as generators and backups began depleting and cell towers shut down.

The director of CODEVIDA, a coalition of Venezuelan health advocacy groups, reported that thousands of dialysis patients were going without treatment as a result of the blackout. While some hospitals were able to rely on back-up power sources, others were dark.

At the maternity ward at the Avila Clinic in wealthy eastern Caracas Thursday night, several mothers wept as nurses held candles to monitor the vital signs of premature babies in incubators.

Zaida Rodriguez, 40, a cardiovascular technician, walked several miles to the private clinic where she works only to be told by bosses that she should leave because the facility would treat only urgent cases and operate with a skeletan staff in order to save on power.

"How is it possible for an oil country like ours to be without an emergency backup in place for these types of situations?" she asked. "This is pathetic."

Venezuela's electrical system was once the envy of Latin America but it has fallen into disrepair after years of poor maintenance and mismanagement. High-ranking officials have been accused in U.S. court proceedings of looting government money earmarked for the electrical system.

While intermittent outages have become regular occurrences in Venezuela of late, rarely have so many states simultaneously been without power for such an extended period. Until now, Caracas had largely been spared the worst of a collapse in the nation's grid.

The government keeps home power bills exceptionally low - just a couple dollars a month - relying heavily on subsidies from the Maduro administration, which is under increasing financial duress.

The nation is experiencing hyperinflation projected to reach a mind-boggling 10 million percent this year, is grappling with food and medical shortages, and has lost about 10 percent of its population to migration in the past few years - including many with valuable energy expertise. Venezuela's economic woes are likely to increase as U.S. sanctions against its oil industry kick in.

State-owned electricity operator Corpoelec blamed the outage on an act of "sabotage" at the Guri Dam, one of the world's largest hydroelectric stations and the cornerstone of Venezuela's electrical grid. Information Minister Jorge Rodriguez described it as a "cyber" attack intended to derail the whole system. He said electricity in Venezuela's eastern region had been restored within hours.

"What's the intention?" he said. "To submit the Venezuelan people to various days without electricity to attack, to mistreat, so that vital areas would be without power."

Pro-government officials often blame outages on Venezuela's opposition, accusing them of attacking power substations with Molotov cocktails, though they rarely provide any evidence.

Guaido did a survey of Caracas Friday to evaluate the impact of the blackout, blaming Maduro for the sorry state of affairs and looking to capitalize on what some decried as a sign of Venezuela's newfound status as a "failed state" even though it sits atop the world's largest oil reserves.

"It's clear who is responsible for this disaster," he said, renewing his call for Venezuelans to take to the streets Saturday in protest. "They keep making excuses, they keep looking for scapegoats, when corruption, calamity are what have caused this situation."

Rubio, who has been driving the Trump administration's confrontational stance toward Maduro, seemed to relish Rodriguez's accusations that he was somehow to blame for the power crisis.

"My apologies to people of Venezuela," the Florida Republican said in a message on Twitter. "I must have pressed the wrong thing on the 'electronic attack' app I downloaded from Apple. My bad."

The blackout snarled traffic amid confusion generated by blackened stoplights; the subway in Caracas broke down; and there were reports that a flight Thursday from neighboring Colombia was turned back because the Caracas airport's backup generators failed, leaving customs officials without the ability to screen those arriving.

A video posted online of the Caracas airport showed angry passengers waiting in front of check-in counters in the dark Thursday demanding to be let on planes.

As the blackout wore on, Venezuelans already struggling to put food on the table worried the little they have would get spoiled in fridges without power. Business owners griped over losses that were certain to compound their already bleak economic outlook.

"The only thing left for me to do is wait for the light to return," said Jose Rodriguez, 51, the owner of a small restaurant in Caracas. "Today will be a lost day for me."