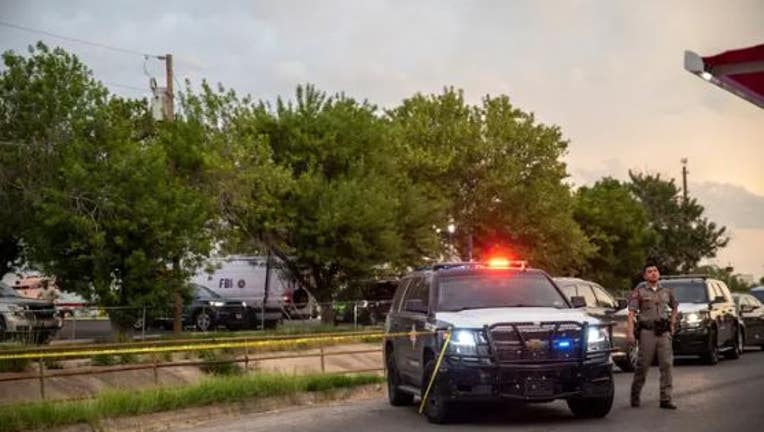 Police block off the road leading to the scene of a school shooting at Robb Elementary on May 24, 2022, in Uvalde. Credit: Sergio Flores for The Texas Tribune

State lawmakers launched an investigation into the Uvalde massacre Thursday, but the witnesses, testimony, and specific goals of the investigation will remain secret for now.

State Rep. Dustin Burrows, who chairs the committee leading the inquiry, said the goal is to provide "answers and solutions" that will prevent future mass shootings. Uvalde law enforcement has come under intense criticism from state officials and law enforcement experts for their response, in which police took more than an hour to enter the classroom where the gunman had opened fire and then holed up with his rifle.

The three-person investigative committee will have subpoena power. El Paso Democrat Joe Moody, a former prosecutor, will serve as vice chair. Former Supreme Court Justice Eva Guzman, who recently lost a bid to become the Republican nominee for attorney general, will also be a member of the panel.

Families of victims and survivors of the mass shootings in Buffalo, New York and Uvalde, Texas appeared before a U.S. House committee Wednesday.

Texas House Speaker Dade Phelan announced the creation of the committee on Friday.

"The fact we still do not have an accurate picture of what exactly happened in Uvalde is an outrage," Phelan said in a statement. "Every day, we receive new information that conflicts with previous reports, making it not only difficult for authorities to figure out next steps, but for the grieving families of the victims to receive closure."

A federal probe of the law enforcement response to the shooting is also underway, in addition to state investigations by the Texas Rangers.

The gunman remained in the school with a military-style rifle for more than an hour before he was shot and killed by a U.S. Border Patrol officer. Meanwhile, students who were still trapped inside with the gunman repeatedly called 911 for help.

The Uvalde school police chief didn’t know of the panicked 911 calls coming from students trapped inside the school, says Texas Sen. Roland Gutierrez, who called it a "system failure."

Experts have said the amount of time officers took to engage the shooter went against modern law enforcement training, which teaches officers to immediately engage with active shooters and not wait for backup, in order to save as many lives as possible. Texas officials have condemned the police response during the shooting as a failure.

Miah Cerrillo, a fourth-grader at Robb Elementary School, spoke before Congress in a pre-recorded video about surviving the mass shooting in Uvalde, Texas.

In Texas, Moody pledged to not let "partisanship" deter the House investigation.

"When the issues are this complex, and the stakes are this high, we need facts first," he said. "We can't develop sound policies based on the conflicting reports we've had, especially when some of them are agenda-driven narratives."

He also said the group must work to ensure that mass shootings do not become "normalized," while noting that the emotions of the 2019 mass shooting in his El Paso district are "still very raw."

"This isn’t a new normal; it’s an epidemic and an emergency," he said. "We can’t accept a do-nothing attitude. Failing to tackle these issues because they’re difficult or politically uncomfortable is cowardly and morally wrong."

Texas Tribune is a nonpartisan, nonprofit media organization that informs Texans — and engages with them – about public policy, politics, government, and statewide issues.