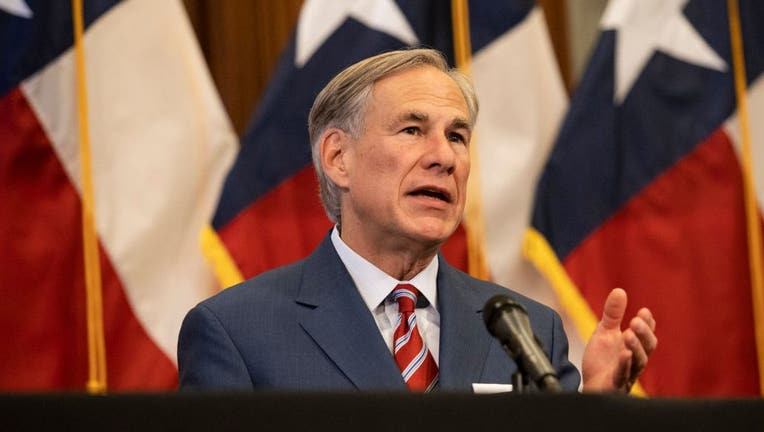 AUSTIN, TX - MAY 18: Texas Governor Greg Abbott announces the reopening of more Texas businesses during the COVID-19 pandemic at a press conference at the Texas State Capitol in Austin on Monday, May 18, 2020. (Photo by Lynda M. Gonzalez-Pool/Getty I

AUSTIN, Texas - Texas Gov. Greg Abbott and the state’s top health official on Tuesday urged vaccine providers not to hold any doses in reserve and to distribute them as quickly as possible as the state deals with record-breaking numbers of virus patients in hospitals and new cases.

In separate statements, Abbott and state health Commissioner Dr. John Hellerstedt suggested that some hospitals are not moving fast enough in distributing the vaccine to the first rounds of eligible patients.

"A significant portion of vaccines distributed across Texas might be sitting on hospital shelves as opposed to being given to vulnerable Texans. The state urges vaccine providers to quickly provide all shots. We get plenty more each week. Always voluntary," Abbott tweeted.

"All providers that have received COVID-19 vaccine must immediately vaccinate healthcare workers, Texans over the age of 65, and people with medical conditions that put them at a greater risk of severe disease or death from COVID-19," said Dr. John Hellerstedt, commissioner of the Department of State Health Services.

"No vaccine should be kept in reserve," he said, shortly before Texas reported 11,775 hospitalized COVID patients, setting a record high for the second day in a row. The state also reported a record high 26,990 newly-confirmed cases.

Hospitals and nursing homes — some of the facilities hit hardest by the virus — have said they planned to stagger the roll out of vaccinations among employees, in part, because the shots can cause side effects including fever, fatigue and aches as they rev up the immune system. Having large groups of medical personnel out sick would cause staffing issues while the surge of COVID-19 patients continues to pour in.

The statements from Abbott and Hellerstedt raises the pressure to move faster.

Earlier Tuesday, President-Elect Joe Biden criticized the Trump administration for the pace of distributing COVID-19 vaccines and predicted that "things will get worse before they get better" when it comes to the pandemic.

President-elect Joe Biden on Dec. 29 gave remarks on the state of the pandemic and criticized the Trump administration for the pace of distributing COVID-19 vaccines, saying it is falling behind.

Trump administration officials said earlier this month it planned to have 20 million doses of the vaccine distributed by the end of the year. But according to data provided by the Centers for Disease Control, just over 11.4 million doses have been distributed and only 2.1 million people have received their first dose.

At the current pace, Biden said "it’s gonna take years, not months, to vaccinate the American people," said Biden, who takes office Jan. 20. He set a goal of administering 100 million shots of the vaccine within his first 100 days in office.

In sports, virus concerns prompted the Southern Methodist University women’s basketball team to cancel the rest of its season, and forced the cancellation of the New Year’s Eve Texas Bowl between TCU and Arkansas in Houston.

RELATED: Texas Bowl between TCU, Arkansas at NRG canceled due to COVID-19

SMU officials said the players chose to stop their season. While the players agreed all possible steps have been taken to keep them healthy, they decided "that the totality of the circumstances was resulting in an in-season experience that they did not wish to prolong."

Athletic director Rick Hart said it was a difficult decision for the players to make, and that the school supported them.

Other SMU programs will continue to compete as scheduled. The women’s basketball team was 0-6 overall after losing its first two American Athletic Conference games.

The bowl game was cancelled because of an increased in positive tests within the TCU program, the school said.

Texas has reported more than 1.5 million confirmed cases. The actual number is believed to be far higher because many people haven’t been tested and some who get sick don’t show symptoms.

For most people, the coronavirus causes mild or moderate symptoms that clear up within weeks. But for others, especially older adults and people with existing health problems, the virus can cause severe illness and be fatal.