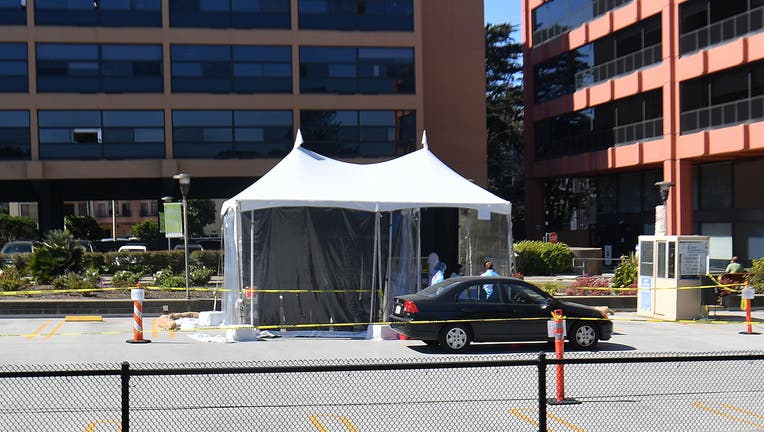 FILE PHOTO. A driver pulls up as medical workers at Kaiser Permanente French Campus test a patient for the novel coronavirus, COVID-19, at a drive-thru testing facility in San Francisco California on March 12, 2020. ((Photo by JOSH EDELSON/AFP via Getty Images / Getty Images)

Governor Greg Abbott made the announcement during a press conference at noon.

He says, initially, the testing facility will be for first responders, healthcare workers, operators of critical infrastructure and resources, and certain high-risk patients.

Gov. Abbot said it is not yet clear how many people the facility will be able to test each day.

The first drive-thru testing facility for COVID-109 is opening in San Antonio.

The governor’s office is also in communication with the City of Dallas and the City of Austin about opening drive-thru testing facilities. He says the testing sites will be run and managed at the local levels.

He expects facilities to be running in at least two of the cities, if not all three, by next week or the week after.

During the press conference, the governor also declared a state of disaster for all Texas counties.

There are nearly three dozen COVID-19 cases reported in Texas.

On Friday, the City of San Antonio reported the city's first confirmed case of COVID-19 that is not related to the cases at Lackland Air Force Base.

Austin Public Health also announced the first two presumptive positive cases in the area on Friday morning. Officials say one of the cases is believed to have been contracted in the Houston area.

In the greater Houston area, at least 18 confirmed and presumed cases have been reported.