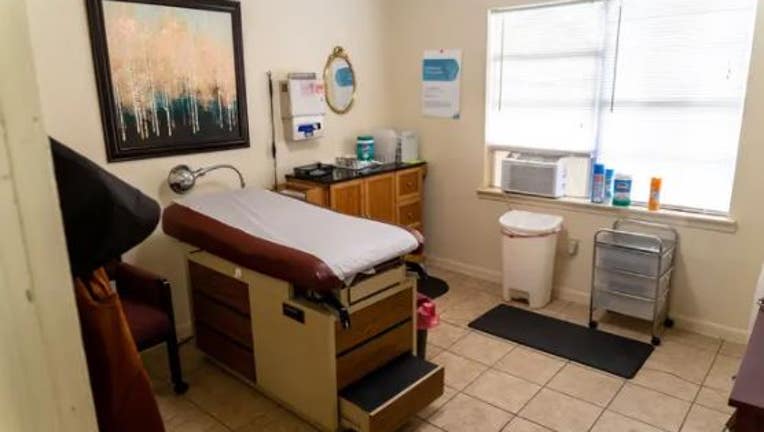 An empty examination room at the Midway Family Planning clinic in Brownwood. Credit: Jordan Vonderhaar for The Texas Tribune

**EDITOR'S NOTE** The original headline to this story was shortened for length.

The Texas Medical Association slammed the state Legislature on Friday, calling its passage of two anti-abortion bills "unconstitutional" and an interference with the fundamental patient-physician relationship.

"Enough," the organization wrote in a statement. "The Texas Medical Association supports our physicians specializing in women’s health and opposes legislation in Senate Bill 8 of Texas’ 87th legislative session and Senate Bill 4 of this special session. SB 4 contains language that criminalizes the practice of medicine. Both bills interfere with the patient-physician relationship."

The statement came during a week when Texas has been at the center of the national abortion debate.

On Wednesday, SB 8, which bans abortion after six weeks, including in instances of rape and incest, went into effect. The new law is a near-total ban on abortion and one of the strictest such measures in the country.

Hours before that, the Texas House passed Senate Bill 4, which would reduce access to abortion-inducing pills, the most common method for patients terminating a pregnancy. As sent to Gov. Greg Abbott’s desk, the bill would prevent physicians or providers from prescribing these medications to patients more than seven weeks pregnant.

Current Texas laws allow, and FDA guidelines suggest, practitioners to give these pills to patients who are up to 10 weeks pregnant.

"SB 8 and SB 4 go too far. Clearly these provisions are unconstitutional, in our opinion. TMA stands for the health care of all Texans and our profession. Enough is enough," the statement continued.

The central thrust of the broader law received particular criticism. It bans abortions after an ultrasound can detect what lawmakers defined as a fetal heartbeat. This can occur as early as six weeks into a pregnancy, when many people don’t yet know they’re pregnant. However, medical and legal experts say the term "heartbeat" is inaccurate, since embryos at that point don’t possess a heart.

Also, in a maneuver to get around the landmark U.S. Supreme Court case Roe v. Wade, the bill is structured to allow private citizens to sue abortion providers and anyone who helps patients obtain abortions after the six-week mark.

Despite pleas from a group of Texas abortion providers, the Supreme Court allowed the bill to go into effect on Wednesday without taking action. Late Wednesday night, the court handed down a 5-4 ruling rejecting the request for a temporary block, but noting that it was not ruling on the law’s constitutionality.

"TMA is shocked the U.S. Supreme Court so far has not stopped the provisions of SB 8 that create a scheme of deputizing private citizens to carry out what the state itself cannot do, due to U.S. constitutional restrictions," the physicians group wrote.

"SB 8 allows for a bounty that encourages practically any citizen to file a cause of action against physicians, other health care professionals, and anyone who ‘aids or abets,’ based on a suspicion. If permitted to proceed, this law will be precedent-setting and could normalize vigilante interference in the patient-physician relationship in other complex, controversial medical or ethical situations."

Meanwhile, the bill that was passed in the Texas House this week, SB 4, which limits access to abortion-inducing pills, would make it a criminal act for physicians to give these medications to patients more than seven weeks into a pregnancy.

"The physicians of Texas never thought the day would come when the performance of our oath would create a private cause of action for persons not connected to or harmed by the action. Yet, that day has sadly arrived in the state we love," the TMA wrote.

Disclosure: The Texas Medical Association has been a financial supporter of The Texas Tribune, a nonprofit, nonpartisan news organization that is funded in part by donations from members, foundations and corporate sponsors. Financial supporters play no role in the Tribune's journalism. Find a complete list of them here.