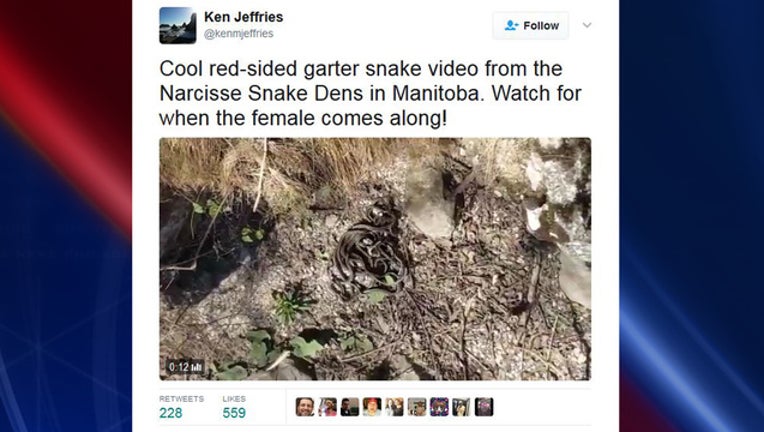 MANITOBA, Canada (FOX 26) - Not a fan of snakes? Then the Narcisse Snake Dens are NOT a place you want to visit right now. Every year tens of thousands of red-sided garter snakes come out of their dens for a few weeks in late April or early May and begin their mating ritual.

The Narcisse Snake Dens consist of four den sites located in the Manitoba providence of Canada. According to the Manitoba Wildlife Branch website, the snakes are most active twice a year— when they emerge for mating in late April to the first three weeks of May, and  when the return to their dens in early September. The mating ritual involves the snakes forming a "mating ball" where one female snake can be surrounded by up to one hundred males.

Twitter user Ken Jeffries visited the dens a few days ago and captured the "mating ball" behavior on video.

The park says the best time to visit the dens is during mating season because visitors can easily observe the snakes while they are preoccupied. There are observation decks to view the snakes, but some visitors don't mind getting up close and personal with the snakes the park says are "harmeless".

Wildlife officials at the dens say all four dens are currently very active. If you’re interested in making the trip, you can check for updates on the snakes’ activity here. If the thought of standing that close to thousands of snakes makes your skin crawl, there are plenty of brave souls on social media to bring the snakes to you -- from a comfortable distance.