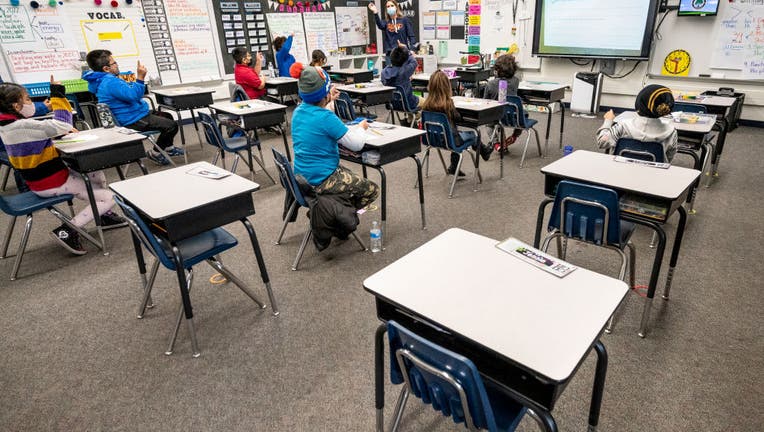 Several desks sit empty in a second grade class at Robert M. Pyles STEM Academy in Stanton, CA. Some school districts are seeing high absenteeism among students and staff and few substitute teachers to fill in the gaps. (Photo by Paul Bersebach/Medi

WASHINGTON - As the omicron variant continues to surge across the United States, school districts nationwide are stepping up their efforts to keep classrooms operating.  An increase in COVID cases has led to school officials asking staff members and others without teaching backgrounds to fill in as substitute teachers.

In Austin, Texas, the demand for substitute teachers has increased. Earlier this week, the Austin Independent School District (AISD) reported 479 substitute teacher requests with most of their instructors out for different reasons. According to FOX7 Austin, the Georgetown ISD and Hays CISD are among the school districts in the region requesting substitute teacher assistance.

Marble Falls Independent School District announced on Jan. 12 that all of their campuses would be closed Friday, due to staffing shortages, FOX7 Austin reported. The school district said that staffing shortages were related to a rise in virus cases in the area. School officials made this decision because the district didn’t have enough staff members to maintain a safe school environment for students.

In Cincinnati, dozens of employees from the central office last week headed to schools that were at risk of having to close their doors because of staffing issues. Brenda Cassellius, the superintendent of Boston schools, posted on social media last week that she filled in to teach a class for a fifth-grade teacher.

On Jan. 6, San Francisco’s superintendent of schools, Vince Matthews, asked all employees with teaching credentials to teach a class.

Meanwhile, in New Haven, Connecticut, hundreds of teachers were out the week of Jan. 3 and school administrators were asked to fill in to teach a class.

Michigan public schools can use non-teaching staff as substitute teachers the rest of the academic year under a law designed to address teaching shortages during COVID-19.

On Dec. 27, Michigan Gov. Gretchen Whitmer announced that she signed the bill allowing secretaries, paraprofessionals and other school employees without a teaching certificate, which includes library aides, bus drivers, cooks and office workers, to work as substitute teachers as long as they have a high school diploma or an equivalent certificate.

FOX7 Austin, FOX2 Detroit and the Associated Press contributed to this story.