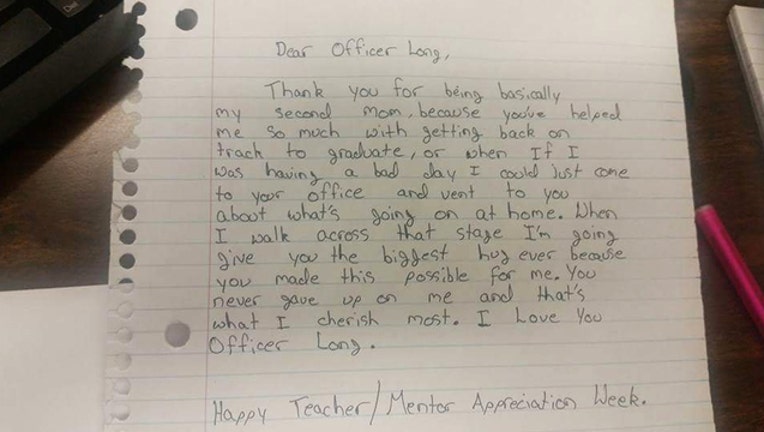 CLEARWATER (FOX 13) - It’s Teacher Appreciation week, but for one Bay Area student, it’s a law enforcement officer who has taught them some of the greatest lessons of all.

In a heartfelt letter shared by the Clearwater Public Safety Twitter account, a graduating Countryside High School student took the opportunity to thank a woman, known only as Officer Long, for helping to turn their life around.

According to the letter, Officer Long was there during hard times at home, and ultimately acted as unwavering support system through it all.

“Thank you for being basically my second mom, because you’ve helped me so much with getting back on track to graduate, or when if I was having a bad day I could just come to your office and vent to you about what’s going on at home,” the letter began.

Officer Long’s kindness, support and faith in the student during those times apparently made all the difference.

“When I walk across that stage I’m going to give you the biggest hug ever because you made this possible for me,” the letter continued. “You never gave up on me and that’s what I cherish most. I love you Officer Long. Happy Teacher/Mentor Appreciation Week.”

If you ask this student, they change lives, too.