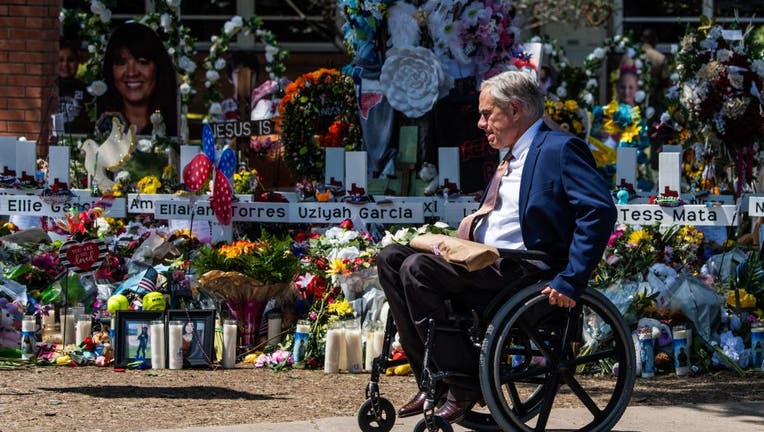 Texas Governor Greg Abbott arrives while US President Joe Biden and First Lady Jill Biden pay their respects at a makeshift memorial outside of Robb Elementary School in Uvalde, Texas on May 29, 2022. (Photo by CHANDAN KHANNA/AFP via Getty Images)

LITTLE ROCK, Ark. - In the aftermath of the school shooting in Uvalde, Texas, governors around the country vowed to take steps to ensure their students would be kept safe.

Months later, as students return to classrooms, money has begun to flow for school security upgrades, training and other new efforts to make classrooms safer.

But the responses have often reflected political divisions: Many Republicans have emphasized school security spending, while Democrats have called for tighter gun control.

CLICK HERE FOR MORE ON THE UVALDE SCHOOL SHOOTING

At every step, the actions have stirred debate over whether states are doing the right things to address the scourge of school shootings.

In a special legislative session in Arkansas last month, lawmakers set aside $50 million for a school safety fund proposed by Republican Gov. Asa Hutchinson. The rules for distributing the money haven’t been finalized, but Hutchinson has said he wants it to help implement recommendations from a school safety commission he reinstated following the May shooting in Texas, where 19 students and two teachers were killed.

The shooting "served as a reminder that the threat of violence in our schools has not abated," Hutchinson said. "It continues to be real, and we have to act with a renewed sense of urgency to protect our children."

Texas was among several other states that set aside money for school security. Gov. Greg Abbott and other top Republican leaders announced $105.5 million for school safety initiatives. Nearly half of that was slated for bullet-resistant shields for school police and $17.1 million was for districts to purchase panic-alert technology.

Other Republican governors who made money available for security upgrades include Ohio Gov. Mike DeWine, who announced $100 million for school security three days after the Uvalde shooting, and Georgia Gov. Brian Kemp, whose state is giving $2.6 million to increase training capacity and classes for school resource officers.

"While these are the latest measures we’re taking to ensure our children’s safety, I can assure you they will not be the last. I will work with anyone, even in the midst of a heated election cycle, to protect our students," Kemp, who is running for reelection, said in June.

Some of the Republican governors who have moved aggressively to bolster school security have ruled out any kind of gun control measures.

Hutchinson had said there should be a conversation about raising the age to purchase an AR-15-style rifle — the type of weapon used in Uvalde — but didn’t pursue such a measure during the session. Abbott also has pushed back on calls for more gun control by families of the Uvalde shooting victims. Oklahoma Republican Gov. Kevin Stitt vowed to fight any firearms restrictions when he signed an executive order on training for law enforcement and risk assessment at schools.

In California, which already had some of the nation’s toughest gun laws, Democratic Gov. Gavin Newsom has signed a dozen more this legislative session and even took out ads in Texas newspapers criticizing the state’s stances on guns.

"We’re sick and tired of being on the defense in this movement," Newsom said in July.

In New Jersey, Democratic Gov. Phil Murphy signed legislation last month requiring the state’s nearly 600 school districts to set up assessment teams aimed at stemming violence in schools. One of the bill’s sponsors recounted hearing of an Uvalde victim who pretended to have been killed in the attack to escape the shooter.

"Does anybody want to teach this — how to play dead?" Assemblywoman Pamela Lampitt, a Democrat, said during a hearing in June.

Despite the partisan divisions on gun violence, a group of governors says it will attempt to find common ground. A task force created by the National Governor Association following the Uvalde shooting will develop recommendations to stop mass shootings, with an emphasis on school safety. Hutchinson, a former chairman of the association, has said the task force will focus in part on how states might use money coming to them through the bipartisan gun control bill President Joe Biden signed in June.

Teachers, political opponents and others have raised questions about the scope and effectiveness of state leaders’ plans.

In Arkansas, Democratic lawmakers questioned whether districts taking the new grant program’s money would be required to have an armed presence on campus, one of the initial recommendations from the state’s school safety commission.

"It’s one thing to say ‘school safety,’ but that runs the gamut of so much," said Democratic Sen. Linda Chesterfield, a retired educator and the only legislator to vote against the grant program. "What specifically do you have in mind, and what price is it going to cost? I guess I’m just tired of having to fly by the seat of my pants and not know a thing about what’s going to go into that (commission’s) report."

In Ohio, teachers unions say one-time funding that’s for equipment like door locks and radio systems — but not ongoing needs like personnel — is helpful but not enough.

Schools need money for staffing, too, including for safety and mental health personnel, said Scott DiMauro, president of the Ohio Education Association.

"Ideally, you’re gonna use funding to ensure that every school that wants to hire well-trained school resource officers, as part of their school safety plan, can do that," DiMauro said. "And from that perspective, you know, the $100 million isn’t going to solve the problem in the long run."