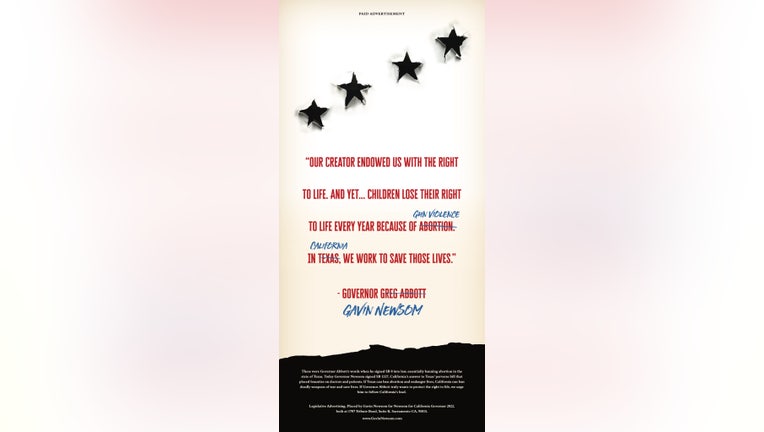 The ads, which ran Friday in the Austin-American Statesman, the Houston Chronicle and the El Paso Times, feature a modified quote from Abbott about Senate Bill 8, which bans abortion in Texas after six weeks. (Gavin Newsom)

The ads, which ran Friday in the Austin-American Statesman, the Houston Chronicle and the El Paso Times, feature a modified quote from Abbott about Senate Bill 8, which bans abortion in Texas after six weeks.

Newsom has also previously criticized Abbott about his response to gun violence following the mass shooting in Uvalde that left 19 students and two teachers dead in May.

The ad also states that Newsom will be signing SB 1327, "California's answer to Texas' perverse bill that placed bounties on doctors and patients."

SB 1327 is modeled after Texas's SB 8, which allows private citizens to enforce the state's six-week abortion ban, empowering them to sue abortion clinics and anyone else who "aids and abets" with the procedure. SB 1327 came after the U.S. Supreme Court's decision in December to allow the Texas law remain in effect while abortion clinics sued to block it.

Following the decision, Newsom directed his staff to work with the California state Legislature and its Democratic attorney general to pass a law that would let private citizens sue to enforce California’s ban on assault weapons, just like SB 8. 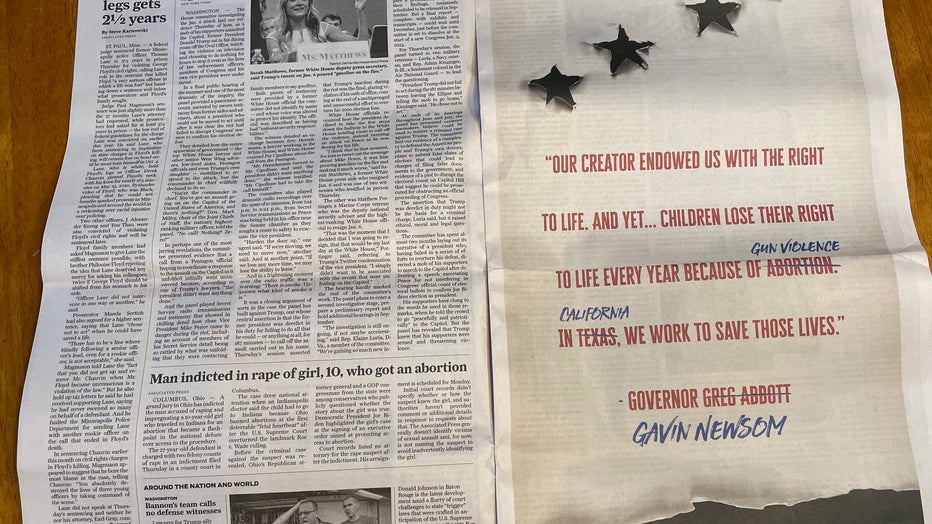 Under California's SB 1327, private citizens can sue anyone who distributes illegal assault weapons, parts that can be used to build weapons, guns without serial numbers, or .50 caliber rifles, says the Associated Press. They would be awarded at least $10,000 in civil damages for each weapon, plus attorneys fees and costs.

This isn't the first time Newsom has placed ads attacking other governors in their home states. Newsom recently placed television ads on FOX News in Florida calling out Republican Gov. Ron DeSantis for his restrictions on books, voting, speech, and access to abortion, according to the Associated Press.